Music: “Born on a Train” by the Magnetic Fields

When I met with an agent about my women writing project she told me that although the stories were pleasing vignettes, they were also very separate sketches that stood alone on a wall.  If I wanted to make my project a success I would not only need to tie my portraits together but I, as the narrator, would also have to take a more active role painting my own picture and transformation across the landscape of my country.

For the past month other women, complete strangers, had opened up their heart’s secrets to me, naked, exposed, trusting my hands to delicately weave their lifestories together.  And during this time, although I had flirted with glimpses of my own demons and my own history, I had been reluctant to reveal my personal innermost secrets to my readers.  It was time to start trusting my readers with my own soul.  I didn’t know it at the time, but I started the journey into myself by meeting with a woman whose own story was an echo of my own, in a different shade of chameleon green.

Kathrin was a friend of a friend, a tall open-hearted nurse that had lived all over the world.   I found her mode- like height enviable, but Kathrin shook her head “At 6 feet tall it’s hard to date!  I always want to feel small…” 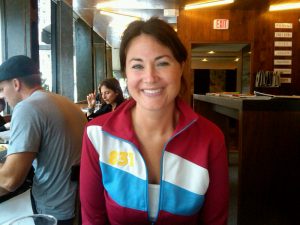 Kathrin, like me, found stillness in movement, and a need to explore the vastness of the earth, rejecting conventional comforts and commitments.  Perhaps her gypsy-like tendencies had roots in her traveling past. Similar to my own childhood, Kathrin also spent hers relocating, not having one singular destination to call home.  Kathrin was born in Switzerland to a German father and American mother.  She was partially raised in Singapore before finishing high school in Connecticut.  However although my parents were physically apart but happily married, Kathrin’s parents were physically close, but heart distances away, which led to an eventual divorce when she was 11.  “It was terrible and confusing-I didn’t know what had happened.”  Kathrin describes her father as an unattached, distant man during the marriage, making his work a priority over his family.  “I spent my childhood vying for his affection.”  Sadly, Kathrin’s attempts to bring her father close didn’t make him stay and he fell for a woman 20 years younger than Kathrin’s mother.  “He left us when he just didn’t want us anymore.”  After the divorce Kathrin mentions her father remained uninvolved; she only talks to him every three months. “I know he loves me a lot….as much as he is capable of.”  However Kathrin also mentioned that she spent her 20s dating men in their 40s, as a way to have “a father figure.”

After the divorce Kathrin’s mother moved the family from Asia to Connecticut. Since Kathrin was raised abroad with tons of international travel, moving to the states was a horrendous culture shock.  She couldn’t relate to the soccer mom culture and left the country as soon as she turned 16 to be an exchange student in Venezuela.  She was first sent to a small factory town near the Amazon, which forced her to learn small town Spanish.  She later moved to the city of Valencia where she danced and partied with other international students, feeling more at home in a third world Latin American country than the country of her passport.  When she returned to Connecticut to finish high school, her friends couldn’t believe she had left for so long. “You missed junior prom!” they exclaimed.   However I do not think Kathrin felt she missed anything at all.

Kathrin went to college at Cornell but found the American fraternity and sorority culture foreign. “I didn’t really go to parties, I didn’t have a lot of boyfriends,” she said. In efforts to find her comfort zone, she once again left the country to study in Sevilla, Spain. Sevilla was just a few hours away from Granada, the Andalucía town I studied in while at college.  “I wanted new experiences that I didn’t yet know about,” she said.  I remember when I was in college it was those new experiences abroad that were most comfortable to me.  When I returned from Spain to finish college I was so distraught by the American sameness that I quickly left again for Germany.

It was the craving for new experiences that brought Kathrin to a “poor, drug ridden trailer park town” near Phoenix, Arizona after her college graduation. She had joined Teach for America hoping for new experiences to learn, grow, and give back.  Amid poverty in the desert heat, Kathrin felt at home for the first time in the United States.  “I met such amazing families there,” she said.  “I was amazed by their lives and the sense of community. “ Although the community was strong, they faced many challenges.  Kathrin was inspired to help them succeed. “ I loved teaching them….I wanted to show them a window of what else is possible.  I wanted to help them get out of the cycle of early pregnancy and high school drop outs.”  When not teaching, Kathrin explored her own windows of opportunity.  Kathrin and the other Teach for America volunteers found pockets of beauty and intrigue in their Phoenix life.  “We would drive across the borders for tacos and coronas.  We would find the diviest biker bars…” Kathrin said nostalgically about the adventurous Teach for America clan.  It was in Phoenix where Kathrin finally fell in love. “He was big, he made me feel small.  Plus he wanted to spend time with me.”  The only problem with the relationship was that her love was engaged to another woman.  Much like me, Kathrin typically preferred men that were unavailable. Throughout my life, I had found most men untrustworthy; they had abused me, they had hurt me, they had lied to me.  However, trust aside, I still managed to dive head over heels into whirlwind romances with the emotionally absent, geographically impossible, and commitment deficient.  I am not sure about Kathrin, but I proactively chose impossibility, too fearful of disappointment should all the logical elements be in place. 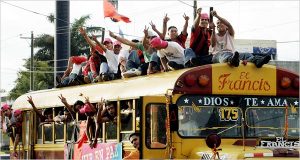 After three years of Phoenix teaching, it was time for Kathrin to move on, her restless soul looking for a new place of belonging.  Her sister had an eco lodge in Nicaragua that was calling her name.  Although Kathrin planned to just visit Nicaragua for a month before starting nursing school, she ended up staying there, buying a house, and working for two years.  I myself had traveled to Chile in my 20s, intending to stay for a short stint, and also remaining longer, extending my foreign fantasy and exploration of Latin wonders.

“I fell head over heels in love with the culture and the people,” said Kathrin, echoing my own voice.  She also fell in love with another man, an intriguing American coming down to work in the lodge. After running around Central America, they moved to Boston together and Kathrin suddenly found herself in a committed relationship. “He was like my best friend, he was smart, committed, and he loved to travel!” However, no relationship is perfect.  Once in the US, Kathrin’s boyfriend started to become a bit jealous and controlling, two traits that are kryptonite to an adventurous soul.  “I felt like I had a noose around my neck,” she said.  As Kathrin felt the pull of New York, nursing school, and a new adventure, the relationship fell apart.  “It became complicated and I became exhausted by it.”

As Kathrin looked back on the two-year relationship she noted that most women would have been happy with it.  “He had money, he was committed. I could have had a comfortable lifestyle and never worked….but it wasn’t enough for me.”  Kathrin didn’t want to feel dependant on anyone.  She told me that while her parents were together her father gave her mother an allowance and controlled how much she spent.  “That lack of independence would suffocate me…..I don’t want to need anyone…..although I do want someone,” she smiled sweetly, hoping that it is possible to find both independence and romance in a relationship.  I was not sure.  The stability of healthy relationships always made me feel fenced in.  I had once left a very solid good-hearted man when he wanted to get married.  I was petrified that my life would end and we wouldn’t able to create the right balance of excitement and consistency. Perhaps in New York……

“But New York is so hard,” and she threw her hands up in the air.  “I have dated lawyers, bankers, Englishmen, Italians…..nothing has worked.  I know I want a family…I just don’t want to settle. Even though she covets commitment, she has a hard time relating to many if its forms.   The typical bridal showers, weddings, and baby showers are enticing,  “I know I want them too!” she said.  Yet they also represent a life that is foreign and potentially restrictive. “I do get moments of panic at showers. I cannot relate to people who have no interest in what else is out there.  I am not cookie cutter and I do not want a cookie cutter lifestyle.”

When she became overly worried that at 31, her dynamic life had prevented her from having a serious relationship, a psychic calmed her, telling her that she was right where she should be.  “Anyone who marries before the age of 30 doesn’t know him or herself well enough to give and take from another person,” the psychic said holding her hands.  Whether it was true or not, we both found solace in the quote.  Kathrin, enough so that she was starting to plan her next life phase, joining Doctors Without Borders.  ‘”Some people think I am crazy to give up my cute studio in Manhattan to go live in the Congo….but I am excited by it.” Kathrin wants to use her nursing and international experience to reach out and help people all over the world.   She could be placed in Africa or Mongolia, but is eagerly up for any assignment.  “The unknown excites me!  What petrifies me is standing still in front of a computer.”  In addition, Kathrin feels that the other people in Doctors Without Borders understand her. “I think if I am to find someone that matches me, it will be within work or an organization like that.”

After talking to Kathrin I felt my heart sigh.  It had finally met someone that understood my own internal conflicts, my gypsy soul, my romantic leanings, and my commitment phobia.  Perhaps I too needed to join an international organization, settling among my own, letting my past help me as opposed to haunt me.  But until then I’ll keep writing stories, traveling the US, understanding who I am, and how I transform.

“If only I could so live and so serve the world that after me there should never again be birds in cages.”

Sometimes the best thing you can do for yourself is…