Music: “Carolina on my mind” by James Taylor 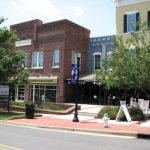 Knowing I was going to be in the Carolinas, my old business school classmate, Jon, invited me over to dinner with his family in South Carolina. Heading south was a slight detour, but a home-cooked meal and friendly conversation was well worth the distance.

I left the gleaming financial buildings of Charlotte and hit the country roads of South Carolina passing pastures, family grocery stands, and thoroughbred horses galloping through the setting sun. I put on my James Taylor playlist, blissful to be also “Gone to Carolina…”

As I rang the bell of the large brick country home, I was greeted with multiple hellos in varying pitches.  Jon and his wife Liz had five curious children. The door opened into an open kitchen with a dining room table set for eight, the daily dinner party in the Vance household.   Liz had made everything from scratch from the falafel to the baklava.  “I was excited to have a visitor so we could eat Greek tonight,” she said.  The children who hadn’t developed an international appetite yet were presented cheesy pizzas, which they eyed with eager delight, their gift for the day’s work.

We said grace, blessed the food, and asked the children about their school days as we passed the multiple plates of homemade goodness.  Liz, a stay at home mother, made homemade dinner every night.  I felt as if I were part of Norman Rockwell painting, temporarily transported to a piece of family perfection that modern generations seemed to have lost.

Liz and Jon are Mormon and have a strong faith that they openly shared with me, the perpetual “spiritual but not religious” type.  The church for them was a pillar of spirituality, truth, and human connection.  In addition to being a place of worship, Liz felt it connected them to others around them.  Liz told me that they made weekly announcements of areas of need and opportunities to connect to the community.  “If someone is ill, I will go over and look after them or read to them,” Liz said.  In addition to helping locally, the church reached out internationally as well. Liz was part of a women’s relief group that met weekly to assist disaster victims across the world.  They put together first aid kits, made baby clothes, and performed other charitable deeds.  “Service” for the Vance’s was an integral daily part of life.

As we finished our meals and conversation, the children politely requested to be excused from the table and permission to play.

As the children scurried of to their games, I asked Liz if she had a nanny or if she managed all five children on her own.  She looked at me. “It’s funny- all the parents with one or two kids ask me how I do it.  But I ask them how THEY do it! The advantage of a big family is that everyone helps each other.”   And as if on cue the baby cried and Lily, the eldest daughter, rushed to his need.  “We all pitch in, Liz said.  “The boys help each other with homework, everyone has chores.”

Liz adds, “Jon asked me if I felt relieved now that the kids are back at school.  But now it’s harder!  I have lost my child labor!” she laughs and then looks at them fondly.  “They are good kids.”

After conversation-time and playtime was over, we finished the evening by going around the room reading different passages of scripture before sending the yawning kids off to bed.

By raising her family with a strong sense of family and faith, Liz hopes her children will stay motivated to succeed throughout life’s challenges and temptations and make a difference in the world.  Liz believes that faith often serves as a gaurdrail to prevent us from falling and making bad decisions in life.  Liz tells me, “You know, I always wanted to be a hippy.  They promoted love and peace. Their message was beautiful and they had so much power!  They had the government at their feet!” She sighs. “But they lost religion!  It is too bad that they got so confused and messed up with drugs and whatnot…..it was their undoing.”

Liz feels that women also have a lot of power and is worried that our own cattiness and judgments often prevent us from uniting and inspiring change.  We judge each other on looks, faith, socioeconomic status……  “Think how much power women have!!” Liz said, with a desire to harness it for the better.  “After all, we are the ones that have the babies….” And sometimes we have five babies.

I was not sure if I was ready for childbirth, but talking to the Vances did inspire me to work with the community again, using love as my tool.

After heartily embracing the family of big love, I left to venture down the dark country roads back to Charlotte, comfortably solo, a concert of crickets serenading me through the open window.