I drove out of Manhattan, narrowly missing zigzagging pedestrians and lane un- abiding taxis.  Although I could have stayed longer in the grand city, it was time to hit the road again. My car, now littered with west village leaves and parking tickets, had stayed idle for too long.

I headed upstate into the fall foliage toward my childhood home, Fulton New York.  I had lived in Fulton from age 7 to 16, an expanse of time that far exceeded my flirtation with any other place.   I had not been back since I left, my family yanking me away in a westward heading family caravan.  Since then I had been in over 30 countries, learning their languages, dancing with their people, spreading my wings.  Fulton, a small blue-collar town, was now more foreign to me than southeast Asia.

Fulton may not have wealth or diversity, but it did have Autumn.  I hadn’t experienced it in 17 years.  Although it was just starting, I could smell the change in the air.  A smell that was associated with soccer games, neighborhood pig roasts, and crisp paper notebooks ready for another year of school.  A paintbrush had fallen from the sky, dripping droplets of rust and crimson on the trees.  It had stolen the colors from the sunrise.

When my family left the city, the industrious town still bore the sign, “Fulton, city with a future.”  For those that that didn’t need imported cheeses in their grocery aisles, or a population that came in more shades than white, Fulton was a pleasant place to grow up. My family lived in a colonial style neighborhood called ‘The Glen’, a cluster of tidy homes not far from the Nestle factory.  On crisp days the sweet smell of chocolate filled the air.   My friend Kori once told me that she always knew when it was going to rain as the smell of chocolate turned more pungent.

“Fulton has changed a lot,” said Elaina, the younger sister of my good childhood friend Shamus.  “Don’t expect all the same things to be there, including chocolate.”

I had met Elaina in Manhattan where she was enrolled in a MPH program at Columbia.  The last time I saw her she was 11 years old.  Elaina was one of the four people I knew from my youth that didn’t still live within a 20 mile radius of Fulton. Her brother Shamus was tragically killed in a car accident six years ago.  Elaina realized she had to get out and live two lives, one for herself and one for her brother. “He is the reason I am here in New York City,” she said with dedication to life in her large celestial eyes.

With some of my memories deceased, and others changed, I was not sure what was in store with my visit to my past.  I decided to explore the depths of the town with my old friend Kori.  Although Kori had once worn the other half of my best friend necklace, we had not seen each other since we were 16 and innocent.  Although life had taken us in separate directions, we embraced and started talking as if we were both still sitting on my porch swing, idly passing time, no distance between us.

“We don’t eat Nestle any more,” said Kori.  The thought seemed ridiculous. We all ate Nestle. Our appetites were most apparent during trick or treating, loyalty to our town industry apparent in the copious amount of Crunch bars filling our bags.

Kori explained to me, “My aunt had worked at Nestle since was 18.  When the factory closed she was in her 50s, Nestle being the only employer in her life.  They didn’t give her a pension or benefits or anything.  Just $500.   $500 for the rest of her life.”

Nestle wasn’t the only factory that closed and destroyed the town’s spirit.  So did the Miller plant and Sealright.  The welcome sign, “Fulton, city with a future” was promptly removed.

With no future in Fulton, Kori went to college, chiropractor school, and later Boston to explore the city and build her practice.  However, her aspirations of big city life were cut short when she became pregnant with a child of man she was skeptical about.  When things turned especially sour she called her mother and said, “Mom, get Ryan and the truck and come and get me.”  Although her mother and brother were the ones to return Kori to upstate New York the next day, anyone in Fulton would have.  That is what small towns do.  They look after their own. “I could have stayed in Boston, sent my daughter to daycare and still been able to eat Sushi every night,” said Kori. “Or I could raise her with her aunts and grandmother and a town that would love her.  Giving up sushi seemed the obvious choice.”

Kori and I drove through Fulton reminiscing our past adventures.   We drove through the elementary school field where I had first played catch and kiss, the junior high where I had spent the ugliest years of my life, and the high school where ugliness faded and Kori and I pretended we were soccer stars.  We drove through downtown, a small one block metropolis where Kori told me not to blink, less I miss it.  We also drove to my old house, a place I left weeping when my family moved to a place I later referred to as the ‘black vortex of my life’.

My fond memories for my old home skyrocketing inside my heart, Kori and I parked the car and knocked on the door.

“Are you an Isern?” asked the man.

“Yes,” I replied, impressed that he knew my last name.

“We were the family that bought the house from your parents!” he said. “He did such a great job on this place.  However there was one thing amiss.  Did you write on your wall ‘this is Heidi’s room. This will always be Heidi’s room’?”

“Ummm…yes.  Sorry about that.  I hope you painted over it.  You see, I had issues with leaving.”

The man smiled and let us inside.  Kori and I explored the house.  She had after all, spent half of her life there too.  She pointed to the staircase going upstairs, ‘Do you remember when Al pogo balled down the stairs?’  I laughed.  I couldn’t remember if that was before or after we had stolen peach schnapps from my parent’s liquor cabinet.  Although we all came from solid families, our group was not the best-behaved group of teenagers.  One winter I was “persuaded” to take my parents’ car for a spin around the neighborhood.  It didn’t matter that I was only 15 without a driver’s license.  I drove around the neighborhood’s icy streets with my boyfriend and friends cheering me on, and managed to crash into a snow bank.  Luckily the neighbor had a tow truck and a plow.  Again, it was small town.  We all helped each other out…even when we shouldn’t.

Kori and I went upstairs and downstairs and finally into the wallpapered living room, a space that now seemed awfully small.  We had spent hours in that room, squeezing ourselves into the same overstuffed blue armchair, talking about life while watching music videos on MTV.  I was amazed at how happy I had been with small town simplicity.

After thanking the owners, Kori and I left ‘The Glen’’ to pick up her tow headed daughter and reconnect with her parents at their country house. 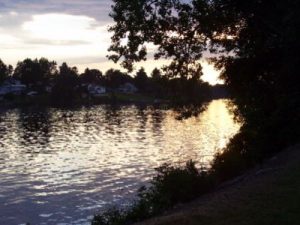 Kori’s daughter, dressed head to toe in pink, was beautiful and euphoric, just like her mother.  Kori’s parents looked exactly the same as I remembered them, with twinkly eyes and echoing laughs.  Her parents had offered to let me stay and live with them in Fulton when my family moved away.  Now they offered to let me live with them again, pointing to a spare bedroom, and a pot of something tasty on the stove.

The offer was compelling but I needed to hit the road again.  I had too much gypsy blood in me to stay still for long.  Kori and I left the house, the crickets chirping outside reminding me that it was going to get dark soon.

There is nothing like returning to a place that remains unchanged to find the ways in which you yourself have altered. –Nelson Mandela