Get Offline: A Counter to Social Media 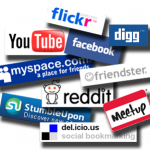 Something about dreary weather makes us all a bit melancholy.  On one such dreary day I was lamenting out loud to my sister-in-law.  Even though my online network made me look quite social, offline I was feeling isolated and lost.  Something was missing from my (un)wired world. She thought for a moment and then said, “You know there are these great inspirational stories I read that you may be interested in.  It’s a collection of different women all over the country.” It took me a second to realize she was referring to the interview section in my own blog. I re-read through them and was amazed by the deep connections I had made while on the road.  From pre-planned meetings to chance encounters, beautiful women from different walks of life had opened up to me.  Many invited me into their homes, all invited me into their hearts. Their voices had given me courage to change my path from consultant to writer.  I missed them.  Or perhaps I missed human connection.  In the past week I had spent far more time with my laptop than any living being. It is interesting how dependent upon technology we have become.  In your lifetime you have likely have moved from paper (i.e. no computer), to a large MS-DOS desktop, to a laptop to a smartphone.  Staying connected is easier than ever before, yet all of us lament that we have no time to have meaningful interactions.  Fifteen years ago my friends and I would carve out time for neighborhood walks to talk about life goals, family issues and the cute boy in math class.  With technology I find myself carving out less and less time for in-person catch-ups.  Why meet when we can just send each other text messages from the couch while multitasking our email inbox and G-chat?  Instead of connecting with one person I could connect with ten. Facebook has also changed the way we interact with one another.  Who would have ever dreamt that I could throw farm animals at people I barely know?  I love Facebook for its ability to instantly unite me with long lost friends and new people I met at the concert last weekend. Within seconds we are connected, gaining instant access to each other’s life portfolio.  However, what does ‘connection’ mean?  Does viewing each other’s photos and music interests really mean that we are truly ‘friends?’  Over a month ago, Dave McClure, a social media and tech startup pundit, claimed that Facebook ‘doesn’t get’ intimacy. 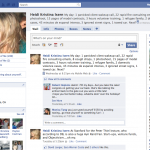 After all, no one is going to share a real issue with their multitude of ‘friends.’ On his blog, McClure writes, “…..yeah, that’s right: i’ve got over 2,000 “friends” on FB, and it’s fucking KILLING me.  Now admittedly most normal folks don’t have *that* many Facebook friends — true: i’m tremendously insecure, an only child, & a pathetic people pleaser — but regardless a lot of “normal” people have the same problem with only a few hundred friends. and i’m guessing neither they nor i want to share our most jealously-guarded deep dark secrets with *everyone* on Facebook.” In my view, the only things you want to share with 2,000 ‘friends’ are brag worthy status updates that make you a micro celebrity in your own network.  I’ll be the first to admit to using Facebook for self-promotion.  Everyone knows when I am in Vegas, dining at a 5 star locale, or have a new blog post up. (like this one).  I’d never admit to staying in on a Friday night or getting a cavity filled at the dentist.  In fact, if you don’t see any activity of my Facebook page, it likely means that I’m in my pajamas watching Casablanca again.  But only my ‘real friends’ get to hear me complain about that. Facebook, in my opinion, never tried to bring intimacy.  It just paved the path for us to reach out and establish contact, often with someone we don’t really know that well.  The real intimate encounter is still up to us.  We still have to get off the couch and go outside.  Or write a letter. (Does anyone do that anymore?) Other new social networking sites like Path seek to address the online intimacy concern by only allowing you to have 50 friends, claiming that is the optimal amount of true friends one can manage.  But if these 50 ‘chosen ones’ are really so close to me, then why do I need a website to connect with them?  Can’t I text them from my couch?  Plus I have different social groups that requite different tailored interactions.  The photos from a Vegas Bachelorette party are not likely to be shared with my brother or the Women Leaders of America group.  And the most important question remains, can a website really replace a conversation over a nice glass of wine? Or is it just a lesser substitute when logistics make that glass of wine impossible? Another social phenomena is Twitter, a clever system that provides real time updates, allowing us to connect with friends, celebrities and random unknowns.  In my opinion this is the best vehicle to connect with someone you would not have otherwise. San Francisco’s mayor Gavin Newsom actually follows my tweets (or his savvy alias does).  However, I use Twitter as a news source, not as a vehicle for a deep conversation.  After all, how much can I really connect to Gavin Newsom with a 140 character limit? I’ve just written about three sites.  There are hundreds of other sites out there all waiting for us to join and engage.  As we become inundated with new ways to connect with one another online, I worry we are diluting the richness each connection, making us more solitary.  Online networks should be an enabler of live connections, not a replacement for them. The challenge is that real human connection takes time.  And time is something we all seem to be without.  Sadly, I fear I am spending so much time sending out quirky updates and comments to the masses, that I have little leftover for an in-person chat about something meaningful.  If we all unhooked ourselves from the internet for a week and replaced online productiveness with slower, fewer, yet more intimate conversations, would we form deeper bonds that would fufill us more?  It doesn’t have to be with someone you know.  I think some of the richest connections happen by being open with strangers. A friend of mine wrote me that she had this amazing experience in the line at Whole Foods.  When she normally would be listening to her ipod or busying herself with her blackberry she actually was engaged with her environment and the other people around her.  While she waited in line she joked around with the other customers.  Jokes turned into conversation that turned into a dinner invitation with people she really enjoyed. I had a similar experience at a Starbucks.  I was waiting for a Stanford lecture by Peter Thiel to start and I bided by time by caffeinating….and talking to people in line.  I met a man that was doing his PhD on human success, collecting data on nature versus nurture when it came to entrepreneurial spirit.  Had I been busy checking people’s status updates or sending out emails, I would have missed out an insightful conversation in the real world. 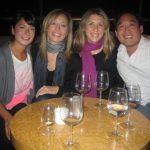 Perhaps there is a technology that will eventually solve for intimate connections and deep conversation.  For those that live far from me, I certainly hope so.  But until then I am aiming to get more face time, less Facebook. Conversing with live humans is still the best warm fuzzy, and the most inspirational connection I can get.

Passion has a bad reputation.  It’s known for making us reckless,…

After an epic Tahoe trip last weekend I had an…