Why You Should Give Your Lover an Onion 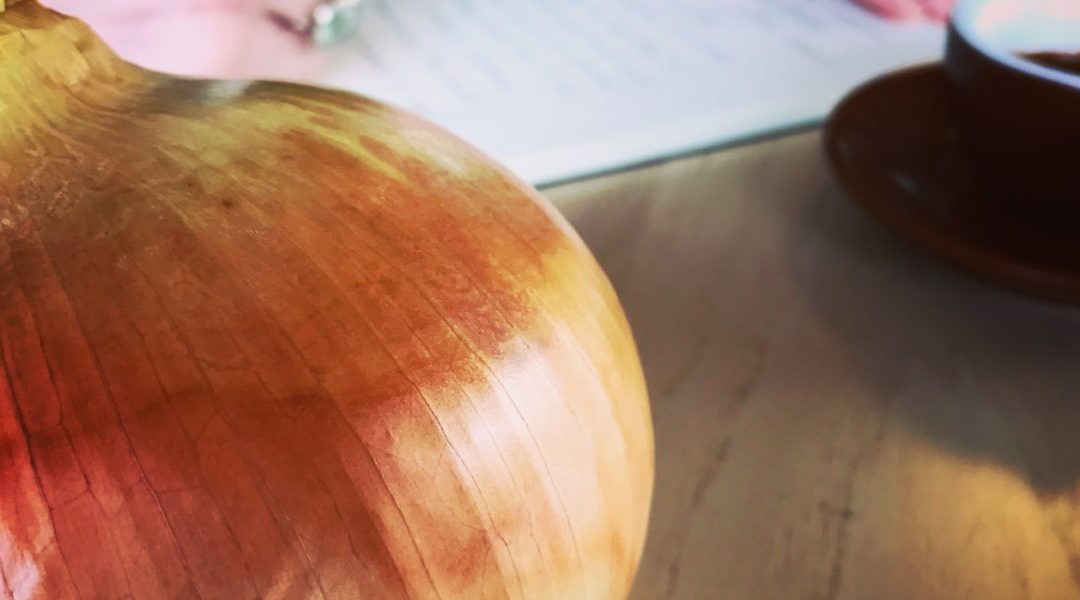 While Shelly was single she was always jealous of the coupled-ups that posted their romantic evenings on Instagram every February 14th. Love, the ‘head-over-heels, roll-down-the-hill kinda love’, was all she wanted out of life. Every night before she went to bed she fantasized of the perfect Valentine’s Day when she would finally have a boyfriend to be ‘head-over-heels’ with. Perhaps there would be an intimate dinner at a five star restaurant, a new gold bracelet engraved with their initials, and later, dark artisanal chocolates perched on little lace doilies covering her stomach.

But when she met Mark in November, she stepped out of her fantasies. The dark stranger wooed her in a dive bar asking her to a limerick duel over cheap PBR. “There once was a lass from the valley, who ‘raised funds’ in the back of an alley…”

Finally she had met the man that could keep up with her imagination and preference for watery beer.

The winter progressed and the two enjoyed romantic moments by the fire and long treks in the snow. There were no lace doilies, but everything seemed perfect.

Yet as they entered February, Shelly’s old fantasies for the perfect Valentine reappeared. She wanted MORE PERFECT and longed to join the seas of coupled-ups in a red rose accessorized surprise. She dropped hints to her new beaux, including sending him a calendar invitation for ‘Romance Indulgence’ on the 14th.

Shelly got a new haircut and dress in anticipation of the night. When the day arrived, she painted her lips a decadent burgundy, hoping they would tempt Mark to kiss her all evening and perhaps even conspire to leave the restaurant early for a session of mad lovemaking. However, when Mark came to her apartment at 7pm, there were no glamorous plans or presents to be found. In fact, Mark was wearing a ten year old sweater with a hole in the neckline. He looked like he hadn’t showered in three days.

“I thought we could stay in tonight,” said Mark, holding a bag of groceries, “and try out that new recipe for goulash.”

Goulash? Shelly’s face fell. What had happened to romance? Was Mark going to starve her of love? After four months of dating had she and her beaux already lost each other in the toils of the quotidian?

“Did you forget about Valentine’s Day?” she asked Mark, her eyes glassy with melancholy.

“Of course not,” he said. “I thought we could use the night to create something together. And oh, I got you this present.”

Shelly shyly moved toward him and opened up a small brown paper bag. What could be inside? Surely not jewelry but perhaps some nice truffles or maybe a satin scarf?

She pulled out a yellow onion.

“I don’t understand,” she said, wanting to die.

Mark laughed. “You were supposed to read the note inside first. I mean we are going to end up using this in the goulash, but there’s another meaning too.

Shelly put her hand back inside the bag and pulled out a folded piece of paper, opened it and read.

Not a red rose or a satin heart.

I give you an onion.

It is a moon wrapped in brown paper.

It will blind you with tears

It will make your reflection

a wobbling photo of grief.

I am trying to be truthful.

Not a cute card or a kissogram.

I give you an onion.

Its fierce kiss will stay on your lips,

for as long as we are.

Its platinum loops shrink to a wedding ring,

Its scent will cling to your fingers,

cling to your knife.

Shelly leapt and threw her arms around Mark’s neck, wiping her teary eyes into the comforting fabric of his old sweater. She realized the sweater Mark was wearing was the same one he had worn when she met him at that old dive bar. Mark had given her a gift beyond gifts and a moment so precious she wouldn’t dare post it to social media.

As the year wore on and the next Valentine’s Day beckoned, Shelly didn’t drown herself in anticipation for a masterfully crafted evening. She and Mark didn’t need a Hallmark infused reminder for passion. And she certainly didn’t want a quantified benchmark of how much he cared about her.

As opposed to one day, Shelly and Mark find multiple moments for romance unburdened by calendar dates. It’s not about presents but it’s more about places. Such as the safe place in the nook of his left shoulder or the dewy hollow behind her right ear.

And it’s not about planned intimacy on the night everyone else is having sex, but instead being swept away by eclectic moments throughout the year. Mark and Shelly still fantasize about that night in her office after the janitor left as well as the weekend up on a cliff in the Sierras where they were blanketed by a million stars.

Shelly and Mark do intend to celebrate Valentine’s Day this year. However, they won’t secure an impossible to get reservation downtown to eat the “Cupid’s Delight Menu.” Instead they will stay home, peeling onions and cooking together allowing each other to taste and add to the sauce.