How to Fall in Love in 5 Minutes 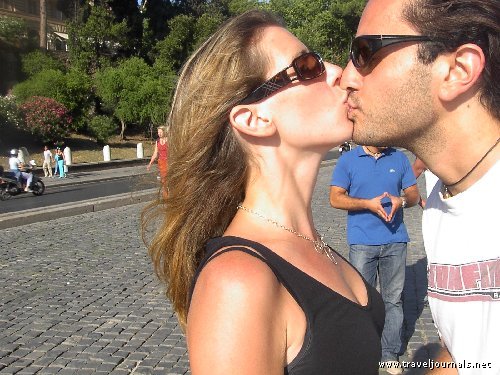 “Have you ever been in love?” I asked a Frenchman with a mustache the size of a baguette. I was technically in Paris for work, but couldn’t resist badgering strangers, researching the prospect of “easy love.”  The Frenchman looked at me like I was crazy.

“Mais oui, but of course!  12 times at least. I could again now in five minutes. Just give me a glass of wine, some jazz, and a woman who knows Sartre.”

When I ask this question in San Francisco, men hem and haw. They ask me to define exactly what I MEAN by the word “love.” After we create an over-thought five paragraph definition (notarized by lawyers), they * might * deem ONE person in their lives that fits the bill.  How did love become transformed into such a grandiose, unattainable concept?  It should be easy, no?

My hypothesis: Most 30+ single Americans are afraid of love.

It wasn’t always like this.  When I was seven Terry Fistick passed me a note that said “I love you” right in the middle of 2nd grade Multiplication Table time.

After receiving his scrawled note, I considered the prospect of love.  He liked karate, wore blue, and had a fabulous bowl cut. Done! It took me less than five minutes to decide that I was in love myself, and blushing, passed his note back with the box checked “yes.” (I love you too). Once that was set, I loved him with all the passion an early Beverly Cleary reader could muster and invited him to play catch and kiss in the neighborhood park.

As I rolled into my 30s, things stopped being that easy. We all grew pickier. Scars happened, walls came up, and being all lovey and vulnerable seemed more frightening than going on a kale cleanse during the holidays.

Why do we tend to build our ideal mate into unrealistically epic proportions and refuse to grab a coffee with anyone that doesn’t meet 25 points on our criteria list? “I’d rather just focus on my career,” comes the explanation.“ At least I can control it.”

Who wants control? And what love comes off of a list?  If you want to fall in love a few tidbits of advice– stolen from Paris, of course.

Focus your energy on ONE person.  Yes-this means putting ALL your (organic) eggs in ONE basket.

“Pretty much we shag, then fall in love, and then decide if we like each other,” explained a Brit in Paris’s 3rd arrondissement.

In the US there is this complicated game called dating where you pretend to like multiple people at the same time and generally do the OPPOSITE of what you really want.  A man waits 3 days to call, a girl waits 5 dates to sleep with him.  You pretend you are busy when you are not and never know how anyone feels at any point in time.  It’s a game of wits, not a game of imagination.

Having mainly been with Europeans, I’m a complete failure at it.

“Hey what are you doing tonight ?” asks American datee #1.

I’m doing nothing outside of wondering why I have so many unmatched pairs of socks in my drawer but the American rulebook says you can never accept anything last minute. You are supposed to look mysterious.

“Oh you know, really busy. Getting ready to go to the clubs.”  I lie holding a random blinking Reindeer Christmas sock in my right hand, wondering how they decided to attach a song button with “Jingle Bells” directly in Rudolf’s buttocks.

“Well never mind..I was going to see if you wanted to go see some music at the Independent but I’ll ask the other girl I am dating….” he said.

Foiled again ….and literally left home alone to a foil wrapped dinner.  And a pile of socks.

“I so miss dating,” claim the smug marrieds from their Friday night couch, happily eating leftover lasagna. “All those butterflies for the maybe Mister Right!  Isn’t it fun?” they ask.

Fun?! If you had any butterflies in your stomach they perished in a day, drowning in acidic anxiety induced indigestion.

In addition to a permanent stomach ache, dispersing your energy on guessing games across multiple people takes away all the joy of falling, a sensation best described as “twitterpated” where the subject’s name is doodled in notebook margins and referenced in any conversation, serving to annoy your friends.

Europeans don’t “date.”  Europeans are laser focused.  They lock eyes at you across the café, their pupils swallowing you whole as if you were an ice cream cone.  They decide, in that instant, to take a leap of faith and bring you down the rabbit’s hole with them.  There is no guessing. Just warmth. With one person. Right away.  For a day. For a month. Or for eternity.

#2 Express Yourself (It isn’t just for Madonna and Italians…)

I recently came back from a family reunion where over dinner my mother passed my father a love poem.  He read it smiling and passed it around the table.  Our eyes misted over as we dove into words of true adoration written by a woman who’d been madly in love with her man for decades. They first fell for each other, and expressed it to each other, 40 years ago on date number 2. Their second date was a bicycle trip across the state of Montana. My mother told me that true love is verbalized, not hidden. “If you don’t take a crazy chance on someone, you’ll never reap the benefits,” she said.

As my mother’s (impulsive) daughter, I once fell for a New York man after spending 48 hours with him when he was in San Francisco on business.  I wanted to do a bicycle ride with him too.  So after he left, I wrote him a love letter by candlelight, sealed it in hand dripped wax, and mailed it to Manhattan.  (This wax sealing kit has been a subject of much torment throughout my adult life, but I digress…)

“You told him you liked him?” said a friend in despair. “IN A WAX SEALED LETTER?! Oh god you are beyond hope. Please don’t tell me you used your calligraphy pen and sprayed perfume on it too…”

“That’s it! Jesus, you have NO CARDS LEFT.  He’s AMERICAN. The game is over.  He now knows how you feel! Just f***  take a picture of yourself in a white dress holding a “I do” sign why don’t ya?”

But isn’t that the point-to let someone know how we feel?  Otherwise how would anyone fall in love or reap its benefits?

I remember when I wrote that letter, high on emotion. By putting words to paper, I fell in love myself.  Perhaps I was really only in love with my own metaphors and clever use of onomatopoeia, but at least I was opening my heart.  Something about admitting your own emotions intensifies them, and they intoxicate you. The right people, the word people, the heart-open people, will appreciate and fall in love with your metaphors too.  If someone is intimidated by your expression, run fast and far away.  You are too poetic for a fearful, monosyllabic yuppie that plays by the rules.

(And for the record…my letter worked..it was a short romance, but it was a good one. I later found out his mother was French. No regrets.)

#3 Love what is in front of you RIGHT NOW!

So many people have long criteria lists for their soul mate.  But I do think that waiting for Mr. or Mrs. Right leads to either intense desperation or insane calculation.  As Marianne Williamson writes in “A Return to Love, ”There is no “Right” because there is no “wrong”.  Many people have created long ridiculous lists of things they must find in a partner and thus overlook many beautiful diamonds in the rough that they could love…right now!  Marianne states that perhaps the person isn’t meant for eternity but rather as a gift- to help you learn and grown and love until you are ready for when your soul mate comes along.

I’ll admit, I’m a drunken gourmet chocolate eater who has a passion for lavish hotel rooms. But I feel that over overindulgence is very important for love.  We Americans are so fucking restrained all of the time, myself included.  No fat, no carbs, no sleeping past 7am so that we can make the gym.  With these restrictions it’s a wonder that anyone falls in love at all.

So…for the love in 5-minute plan we need to teach ourselves to let go and give in to hedonistic urges.  Love happens through the senses, after all.  Bite into that molten lava chocolate cake and don’t think about consequences.  Let the sinful flavors overwhelm you. All of a sudden you will be open to possibilities of a more seductive nature.  Have that third glass of wine.  Who cares?  Lose control and cast aside inhibitions.  Allow yourself to fall down a rabbit’s hole with a stranger and fall in love.  For a night, for a week, or for the rest of your life.  Take a risk on another human being! What’s the worst that can happen?  You’ll open your heart, perhaps break it, and then pick yourself up from off the ground and trot off again.  If the world ends tomorrow, isn’t it better to have risked it all for a grand amour than to have cowered in the basement alone?

In the end, love rules the world.  It’s the reason castles are built, songs are written, and we all go out on a Saturday night.  We all want one special one to last forever, but until then, can’t we just enjoy more love? It’s certainly better than re-arranging socks.

Love is a force more formidable than any other. It is invisible – it cannot be seen or measured, yet it is powerful enough to transform you in a moment, and offer you more joy than any material possession could.