Interview with a Mexican-American, Re-Inventing

Music: “A Kiss to Build a Dream on” by Louis Armstrong 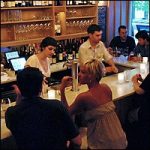 Perhaps it was the humidity, or the heat seeping up people’s bodies from the hot sparkly cement, but the hardness of New York City melted away.  People’s eyes softened and their hearts opened.   If you were able to get them to sit still for even a second, they would stay and talk to you for hours, especially if wine flowed.  Many have told me that they find it therapeutic to release their stories. In New York, everyone has a story.  It is the land of the dreamers, adventure seekers, and life maximizers.  A bartender once told me, “You have to have a purpose to be in New York.  The city is too hard for people to flounder without a goal.”

Carolina, or Carol, is a product of dreamers and opportunists.  Her blood is ripe with ambition, so it is natural she now calls Manhattan home.

Carol is the first American born in her family; her parents fled Mexico to the land of freedom and opportunity over 25 years ago.

“They both escaped illegally,” she said. “My mother even lost a sandal while crossing.  She literally ran across the border barefoot.”

Carol told me that that the border control wasn’t the same force that it is today.  She said, “During the 70’s all the families in Mexico had a theme—the men went to the US to work.”

Carol’s father fled Mexico young and never got the chance to finish high school.   However, lack of formal education didn’t stop the man from tackling life by the horns.

“He was always very smart.   He was a feisty little poor boy that could outsmart the rich kids,” said Carol.   Unlike many Mexicans who worked in heavy labor, Carol’s father landed a job as a janitor for an air conditioning company.

Carol’s mom was impressed with her father. “She thought working in A/C was a very important profession.”  The two escapees fell in love in southcentral LA, a Hispanic area where English was a foreign language.  “They met in a Latin club run by the Mexican Mafia,” said Carol.

However Carol’s parents wanted a different life than Mafia run clubs.  Carol’s father eventually became second to the A/C boss, helping him grow the business.  His success enabled him to move the family out of south central and into the LA ‘burbs for a better life.

“I will always remember my first day of school in the ‘burbs’,” said Carol.  “It was the first time I was surrounded by white people.  I kept slipping in and out of Spanish and English, confused.”

Carol told me that she was embarrassed about being Mexican.  “It made me different from everyone else,” she said. “All the boys liked blond girls.  Plus I was skinny and awkward.”

In addition to feeling out of place herself, Carol also struggled with being raised in a culturally different family.  “My dad was super traditional.   My mom had an accent.  I was embarrassed to speak Spanish and became resentful of my parents that I was different than everyone else.  I lived in fear of the mean kids.”

Having seen less-traditional forms of family life, Carol rebelled against her father’s expectations.  “My mother once went away for the weekend to see friends and my father told me to clean and cook for the family because I was the woman.”  She laughs, “I rebelled.  I made signs and picketed around the house.  I also got my little brothers to join me.”   At age 7 Carol was on strike against her parent’s belief structure.

“All the white kids had a relationship with their parents that resembled friendship.  Mine was very much parent and child. There were many things I could not do or talk about.”

Carol also struggled with her identity. “As a Mexican, I thought I should try and seek out other Hispanics in High School,” she said.  “But they told me I was white-washed.  Due to my parent’s success I spoke differently, acted differently, and drove a nicer car.  My father’s success set other Hispanics against me.  I felt so displaced.  I didn’t fit in with the whites and I didn’t fit in with the Hispanics.”

After High School Carol went across the country to Georgetown University.  “I wanted to get out. At the time, I wanted to get as far away from my parents as possible.”  As the first one in her family to receive a university degree, Carol struggled with what she wanted to do with her career after graduation, wanting to pick the best thing possible. “My parents were always supportive but as the oldest I put all this pressure on myself to succeed. They had given me all this opportunity…”

Carol battled anxiety for years, all self inflicted out of a desire to seize every square inch of the American Dream her parents gave her.

Carol always had a love of photography and decided to focus on it. “I always liked capturing a moment in time.  I knew if I didn’t pursue it seriously, I would always wonder.”  Carol moved to New York City, the center of the photography world.  “But the more I developed, the better I became, and the scarier it got,” she said.  What started as a hobby to capture beautiful things turned into a political game.  “Like everything, it’s a business.  There was shady things and manipulation.  People really got taken advantage of.”

Determined to not let her passion become her enemy, Carol decided to leave photography as a hobby and look for another way to make money. Inspired by the sun protection trend and a parasol that her aunt had sent her from Japan, Carol decided to launch her own parasol business in the United States.  “It is New York.  People are weird.  They wouldn’t notice a girl carrying a parasol…” However a few people that saw her carrying one around did take notice…and asked for orders.  Carol launched “Carasols” and built up a small but steady online business. However the orders were not large enough to sustain herself.  Department stores wouldn’t carry it, and convincing mainstream America to buy in was futile.  Carol once again looked for other career routes determined to land firmly.  It was challenging. “Here I am with a random parasol and a floundering photography business….I needed to find something more defining!”

Carol then noticed herself sneezing and getting ill after eating wheat products. She talked to others with gluten allergies and started become very interested in nutrition and its affects on the body.  “I started reading everything on nutrition I could get my hands on.  I went from 0-60 miles per hour, completely throwing myself in.” It was just a matter of time before Carol found herself enrolling in a Masters program in Nutrition at NYU.  I remember looking at the program on Thursday.  The application deadline was Sunday.  I called my father and he said, “Sunday?  It’s only Thursday!  What are you waiting for?!”

Carol is now deep in classes, excited to have a profession that can help people. “I will admit that, thanks to my parents, I have had a rather charmed life filled with opportunity.  I had strong supporters and role models.  But not everyone has this.  I see all these depressed people that cannot lift themselves out of their hole.  I want to help them.”

In order to make both herself and parents proud, Carol really hopes that she can make a solid career out of nutrition.  “I am fearful that like with photography and the parasol business it won’t work out…or I will stop to like it.  My parents didn’t have any choice at all…and here I have all these choices.  I just really want to make the best one!”

With both determination and zest for life, Carol seems primed for success. And if nutrition doesn’t work out, she will move upward to another opportunity.  That is the beauty of the American Dream-Constant reinvention.