Life is a Piece of Cake

There is no reason to cook in New York City.  In addition to kitchens being the size of a cigarette carton (and often smelling similar), delicious ready made food is abundant. From restaurants to deli’s to street vendors, it is impossible to starve in New York. After a month of eating roadside undistinguishable meat, I decided to turn vegetarian while in Manhattan.  My past conversation with the veggie, hippy racecar driver also inspired me to do things a bit differently. Although giving up animal flesh would have been impossible while in Texas, this city provided so many options that were meat free that I didn’t even notice that anything was missing.

One food that I am pleased to announce is vegetarian is the cupcake. 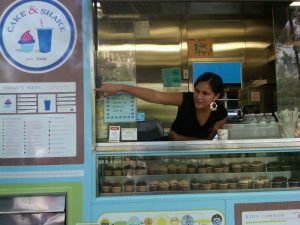 ‘Cake and Shake’ is aluminum trailer of sweet delight that parks itself out of Washington Square.  All cupcakes are organic with decadent fillings like banana mousse and mocha truffle.  While debating which type of sweet connection I wanted (yummy nut or banana split?), I started speaking with Cynthia, the shy, sweet cupcake vendoress.  Cynthia is 19 and has been working with cupcakes for almost a year.  Before her career in baked goods, cleaned New York’s parks, took care of horses, scooped ice cream, and served hamburgers. “I have been working since I was 14,” she said.

Cynthia had started pursuing a degree in nursing, but then became pregnant and needed to work full-time to ensure income stability for her family.   However, Cynthia isn’t one to complain.  She enjoys the cupcake life and plans to eventually finish her nursing degree in a part-time program once her boyfriend, her child’s father, gets a job.

“I like it, the hours are good and I see different people every day. Plus I love watching the excitement in the eyes of the children that come by.”

Cynthia works about 30 hours a week, a necessity to support her daughter and boyfriend who is a night school student. “He cannot work easily because he has hemophilia.  Any type of vendor job that involves standing or serving is out. ” Cynthia looks at me proudly.  “I am the breadwinner for the family.”

Cynthia hopes that once her boyfriend completes his degree, finding a hemophilic- friendly job will be easier.  “I cannot wait for him to finish school and work so that I can start school again!”

I asked Cynthia what type of nursing she wanted to go into. “Whatever type is available to offer me a good career. I want to start saving for my daughter’s college.  I don’t want to always be in cupcakes,” she smiled.  I was amazed that this young girl was already thinking about a one year old’s education.

However, Cynthia is very good at saving, a task she has been doing since her first job.  At 19 Cynthia had saved enough money for a small down payment on a house in New Jersey.   ‘”I don’t have a bank account.  I just keep all the money in a shoebox at home.” I asked her why she saved so much instead of spending it on clothes or the movies. “I always wanted to ensure I had enough money for what I wanted in life.  First it was a car…and then, well….I had a daughter.”  I tried to explain interest rates, CDs and IRAs to Cynthia but she wasn’t convinced to move her money out of her shoebox. 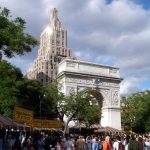 Right now Cynthia’s uncomplicated life is happy.  When I asked her if she found New York hard she looked at me in surprise. “I work with baked goods and children. I see my daughter every day at 6.  This is pretty easy!”

As I walked away with telltale cake crumbs on my shirt, the sun burst open from the sky, lighting up Manhattan.  With a full belly and a warm face, I started to wonder what the rest of us really had to complain about.  Perhaps we should all work in cupcakes.

“As you simplify your life, the laws of the universe will be simpler; solitude will not be solitude, poverty will not be poverty, nor weakness weakness.”

Every year American families sit at dinner tables laden with…