Be Naked: A Weekend in Esalen 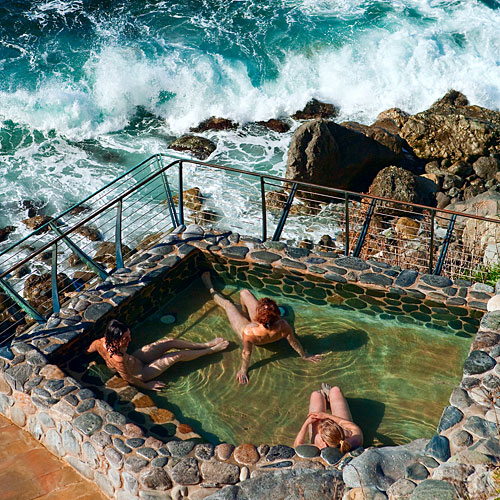 Rather than juggle Memorial Day barbecues, I decided to head back down to Big Sur for the long weekend. No, this time I wasn’t going to a monastery to think impure thoughts. Rather I was going to Esalen to not think and be impure.

Esalen is a beautiful new-agey retreat built into the cliffs of Big Sur that reputedly conjures “tantalizing visions of adventure, of unexplored frontiers, of human possibilities.” To some “Unexplored frontiers” refers to the 27 acres of organic gardens, pavilions, schools, rivers, seaside views and world-renowned workshops on the arts. To others, “Unexplored frontiers,” means the famed hot spring area where people joyfully frolic naked.

I drove down the ocean highway into Esalen’s guarded entrance with a flight of anticipation bumblebees in my stomach. Although well versed in yoga, meditation, and pink covered self-help books, I had never been to a ‘workshop’ before.

A man with thinning wisps of hair and brown crinkled skin greeted me at the gate. His jeans hung loose enough to reveal a tight vegan fed stomach. He eyed my beat up car with appreciation. This was likely the only place in California where a Honda had more clout than a Mercedes. If only I had a Prius…

“Ahhh…well hello there. Which workshop are you here for?” he asked holding out a clipboard with lists of names.

“Um, I don’t remember.” I had just booked the retreat 2 days prior, managing to cut the wait list citing my critical need of inspiration outside of Katy Perry songs.

The gatekeeper looked at me and winked. “Aha. You must be here for the suffering class, no?”

Suffering? Had my neuroses been talking out loud again?

I blushed and looked pointedly at the passenger seat. The only thing in it that resembled a man was an image of Steve Jobs on the cover of his biography.

“No, no the class on….something about mind and happiness”

“Sorry, what’s that? Minding your Herpes?”

“Happiness!” I screamed. “I’m here to be fucking happy.”

“Right. You must mean Mind, Mood and Happiness with famed psychotherapist Ronald Alexander. Here’s your keys, go on into the left, and Miss,” he looked at me, “You’ll enjoy it.”

I left my judgment and fear on the curb and drove in.

My workshop teacher, Ronald Alexander, was exactly what I hoped a mind-body psychotherapist should look like. He had wiry white hair, a face lined with wisdom (and possible history of LSD) and twinkly blue eyes. What made me trust him, however, was his hard Boston accent. If an Irish Catholic could find the Buddha, then so could anyone. He told us to sit down and he would guide us on our journey.

As soon as I entered the meditation circle, I saw an oddly familiar face. Wow—it was Danny! I had met Danny 2 years prior in Troncones, Mexico at a resort called “Present Moment.” I was somewhat embarrassed-were we both New Age retreat junkies? Was I going to run into him next year at a drum circle in southern India?

I hid my embarrassment to give him a hug. After all, he was the impetus of my whole road trip across the United States 18 months ago. “You have to capture the voices of more women,” he had said. “Get out of your San Francisco shell.”

Now, 2 years later he asked about the book I was supposed to be writing about the trip.

“So is it finished yet?”

I knew I did—I couldn’t run the chance of seeing him again Ohming will nothing to show for it. I wasn’t someone that preached transformation and then did nothing about it. I wasn’t a fake Ohmer.

Don’t worry. Esalen doesn’t preach “Bad Naked” discussed in Seinfeld where people sit around nude eating pastrami sandwiches. You eat fully clothed. However, there are plenty of other opportunities to get naked.

From personal discussions to the moonlit hot tubs, hedge fund managers, fashion designers, and technology executives removed their layers of protection. In class, Ron brought us through our personal tales of self-judgment, abuse, failure, separation, even family suicides. Everyone was raw…and no one was judged. The unveiling didn’t stop there. In the vast hot spring area men and women casually sauntered around buck-naked….and no one seemed concerned about dropping the soap.

Of course, men’s penises did shrivel up in the heat of the baths (thank God—who would have wanted giant schlangs floating around in their pool). And yes, some women did have odd shaped areolas. People’s scars, birthmarks, and dimpled skin were in the open for all to see. As I stood above the rock cliff showering, a buxom woman looked at me and said, “It’s kinda like Eden isn’t it. You know, before we ate the apple. We are all so accepting of each other as humans.”

The Only Thing Permanent is Change

According to the Buddha (and Ron Alexander) attachment is the main source of all our despair and disappointment. We cling to the past (often making it better than it was) and we fantasize about the future (pretending that we can control it). If we just realized that everything was temporary, we would be better equipped to stay in the present moment. Through our mediations we were urged to let go, embrace impermanence and be free.

“You Lose Your Grip, You Slip….into a Masterpiece.”

The line is from Leonard Cohen, who Ron gleefully quoted. Out of devastation, loss, and troubling times come our best work. Ron said to use our negativity and self -destruction as fertilizer to help grow our garden and create that which we were meant to do. He pointed to famed artists that built their best work out of hardship. Now this doesn’t mean we have to become alcoholics like Hemingway or cut off our ear like Van Gough….but we shouldn’t shun darkness completely. Without it there is no light.

Sunday evening Esalan had a DJ come in for “Dance Church” where people listened to funky beats and wildly bopped/jerked/flailed around. At 5pm. Sober. Alone. I was reminded of a “Meditation in Movement” class I went to in Bali where I actually thought someone was having a seizure. As I started dancing to my own sweaty beat I commented to a new friend, “I think this is the first time I’ve danced so much without being under the influence.” He smiled at me, “You go girl. But you are under the influence….the influence of Esalen.” If only I knew how to bring back non-judgment to San Francisco…

The hard part about escapes, retreats and vacations is just that—bringing the learnings and relaxation back to everyday life. However, I was dedicated to thinking more positive, letting things go that I couldn’t control, as well as spending more time in my birthday suit. As for the book, I have 6 months to finish it. I’m debating hitting India over the holidays and wouldn’t want to be accused of fake Ohming.