Gut Feeling? 4 Reasons NOT to Listen to It 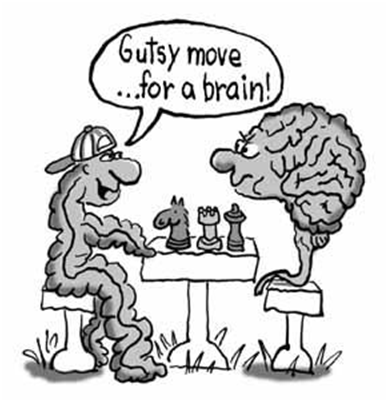 “Just listen to your gut,” popular wisdom says. Hell, I’ve even said it myself.Your heart may lead you astray and your head could hold you back, right?

But sometimes our gut is dead wrong. Like the time it told me the habanero-fired burrito at 1am was a great idea. So when do we listen and when do we tell it to shut the hell up?

It’s first useful to understand what the “gut” even is. Our gut, in addition to being a reservoir of digestive acid, acts as our internal decision crockpot. It cooks up life verdicts from incredibly intimate ingredients-our life experiences and our perceptions of ourselves, others, and the world around us. However, in the simmering process, truth sometimes evaporates.

Our own perceptions, and thus our gut, can hold us back.

Reasons to tell your gut to shut the hell up:

Fear holds us back from love and success every day. We are so afraid of the unknown that we willingly accept the safety of the status quo. Our gut often tells us NOT to do something because it’s trying to protect us from failure. It calls in memories with a narrative of our unworthiness for backup — past stories of how we’ve failed at a job, as a person, or fallen short of our dreams.

“You’re being too passionate again, Heidi,” my scaredy cat gut cautions. “You don’t want to get in over your head and be disappointed.”

It also warns me about what I write — what if another client reads my blog about egg freezing? And worse, what if my writing is just no good?

“Well, you are above average…but not by too much,” an old high school teacher once told me.

My gut has regurgitated that quote a thousand times over the years, making me doubt myself on many things, including writing publications. But last month I decided to mute my gut, and stop thinking out of fear. The fear dissipated and I submitted my first short story to a literary publication.

The opposite of fear is overconfidence. Instead of feeling like I should hold back, I go for it, all cylinders on fire. My gut once read the book, “The Secret” without asking my permission and ran with it. The Secret is like practicing positive thinking after doing four lines of cocaine. It says, “If I really want something bad enough it will come to me.”

After a lot of hard work, I did land my dream job but the dream salary I want is still a figment of my gut’s imagination.

I’ve lived in Silicon Valley for 12 years. Overconfidence runs deep here. I watch people join companies based on unrealistic valuations and millionaire dreams while they give up other good, stable options. I then watch the companies fail, the equity values disintegrate, and people try desperately to remove their garish anotherapp.com tattoo.

Overconfidence applies to love as well. My entrepreneur friend Shelly has been desperately coveting an unattainable man for three years. For some reason she thinks she can win him over by sheer will. Yet she ignores the available nice guys because her gut told her that they “just weren’t curiousenough. Mr. Unattainable will come around.” Shelly is going to go through menopause before Mr. Unattainable comes around. The main thing he’s curious for is a ménage a trois.

If Shelly can tell her gut to shut up and explore the “less intriguing” options, she may reach greater happiness. Confidence helps us choose, but overconfidence makes us choose unwisely.

Often our gut just keeps us on a cycle of doing what we know. It’s not the gut’s fault, it just doesn’t know any better. For example, introverts struggle with going out and being social. I know a few that feel the most comfortable on a Saturday night home alone on their couch. When they get a party invitation, their gut says, “Nah. You won’t enjoy yourself. They won’t be your type of people. Stay home and watch Netflix.”

So they stay in, just like they have for the past 25 Saturday nights. However, if they had broken their stay-in habit and gone out on just one of those occasions, they may have actually had a good time and discovered another layer of the world, and themselves. Doing things that make us uncomfortable is a critical part of individual growth. But our gut doesn’t know that. So perhaps it is time to feed it new things and give it more narratives to choose from.

4. Separating Fiction from Uncertainty-Mind the Gap!

There is a human tendency to replace uncertainty with fiction. Ambiguity is uncomfortable so we invent fiction and feed it to our gut, and then our gut regurgitates it back to us. Our gut often tells us things based on alternate realities — some magical, others horrific — all great stories. Be careful of fiction. It’s very seductive.

For example, one night I forgot I had a dinner party and went to see a live music show. I’m always punctual and never flake so my friends were very surprised that I wasn’t at their dinner. They were so surprised in fact, their collective guts assumed I had been killed.

“It’s not like her to not show up…..she’d rather die than be tardy,” they told each other.

My phone was off so they assumed it was all part of the murder plot. Within three hours, two police stations and three hospitals had been called inquiring about my maimed body. My entire social circle was on alert, searching for a fictitious stalker that must have taken one of my blog posts the wrong way. They were almost disappointed when I came home at 10, unharmed. Their guts were seduced by fiction. Afterall, the only real online stalker I have is my mom.

Unless we’d like more drama in our life, it’s wise to pump our stomachs of fiction impurities before we take its reaction as the whole truth.

There was a time when I thought my gut knew everything. In fact, I would hold candlelit séances to bring out its voice, just like conjuring up spirits during my junior high Ouija board parties.

Now I realize that my gut, just like my heart and my brain, is a mere mortal organ. It isn’t a spirit, nor is it God. In fact, it can get rather cranky at times.

Some call the cranky voice IBS (Irritable Bowel Syndrome). I call it IDS (Irresponsible Decision Syndrome). IDS is s condition where hypotheticals are churned through at lightening speed until the gut gurgles out a decision before I understand why. I’ve learned that before I proudly proclaim a “gut decision” I should take a moment to reflect and ensure it isn’t based in the wrong sort of stories.

To help me battle my IDS, I’ve decided to take a ‘gut decision cleanse.’ In November, I will send my gut on vacation far, faraway (like, um….Oakland). When a detoxed version gets back in December, it will be rejuvenated to better guide me through life and love with new and better stories to choose from.