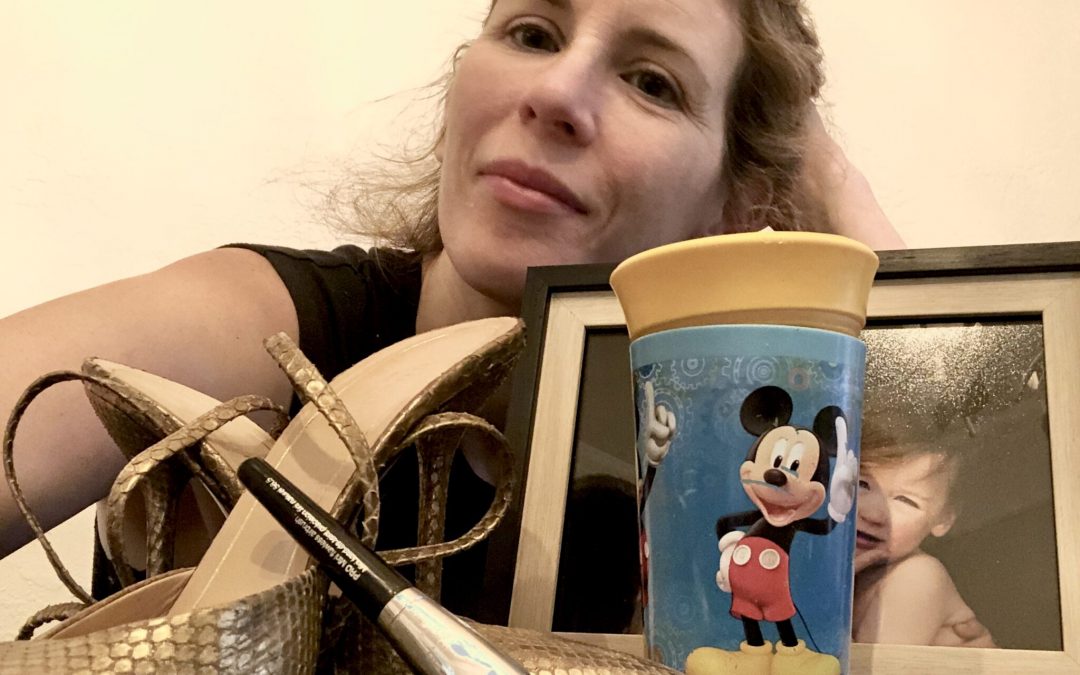 I’m a suburban mom. Many scoff that I was really a socialite. I mean, was I really photographed at the San Francisco Opera opening night along with Gavin Newsom? Um no.

But I did weave in and out of parties at the top of the Fairmont’s penthouse and across white painted mansions in Sea Cliff, rubbing my mediocre elbows against ones belonging to tech founders, media savants, and musicians. If I rubbed against them hard enough, perhaps I could become one too.

I wore my gold python Gucci heels in earnest.

It worked. People seemed to know my name, even when I didn’t have a clue who they were. Maybe I was famous for my mile high footwear choices. Perhaps they remembered me from the ski house in Tahoe or that startup jaunt to Sicily where we danced until 5am. Or maybe they had read my blog, finding me approachable because I wrote about the shared impossibility of finding “The One.”

No one knew I *thought* I found my one a long time ago. It ended in the most clichés of heartbreak. Once I figured out how to get myself up off a heaping mess on the floor, I moved to San Francisco. Perhaps they’d be another “one.” A better “one.” I ignored who I once was (REI, writer chick) to become something better too. ‘Better’ included executive presence, a cushy salary, bikram yoga, and size 2 dresses. Better also included triple booking most evenings so I could flit from cocktail event to event. I was an innovation consultant by day, San Francisco party hopper by night.

Wine and whiskey went down my throat in multiple coatings each weekend. I knew I was meant to do something more profound with my life. Perhaps this was just a phase? If Picasso had blue, could I have bourbon?

Before I had been more careful with alcohol. I was too type A to stumble around aimlessly. Careful didn’t apply to my San Francisco bourbon phase. Many nights I had no idea how I even got home. (Thanks to all of you that safely drove me).

There was one night I ate 22 canapés, too numb with liquor for the neurons to transmit to my brain that I was full. I remembered this thing a girl in college did and tried my best to replicate the act by scratching the back of my throat with my index finger. All the gross calories I had swallowed miraculously came back up. I stared at the acrid orange lumps in the toilet in fascination. They were little islands of overindulgence swimming down into a sewer…

I focused on my career with serial clients and pursued romance via serial monogamy. Most of the men I dated were “successful,” “handsome” or ”engaging”, but my relationships were not built to last past a few photo ops. Most were too absorbed with their career, their haircut, or the relentless pursuit of life, liberty, and other women’s inner thighs.

They didn’t want to find “The One.” I lied and pretended I didn’t either. I felt much safer being independent and aloof. I didn’t want another broken heart. No one can break your heart, if you don’t have one.

Therapists assumed I must have had an awful relationship with my father and was seeking out the same destructive tendencies in a life partner. My relationship with my father is, and always has been, just fine. He was a good dad and is still married to my mom, a woman I consider one of my best friends. Perplexed by my healthy family dynamic, therapists assumed I had some other tragedy early in my life. I did, if you count our three year old Corgi suddenly dying of a brain tumor when I was in junior high. Maybe that taught me the futility of everlasting love.

Despite my many friends and acquaintances, I felt lonely. Secretly, I missed REI, writer chick. I wanted to jump to a new phase with simple rituals like going to Costco on Saturdays and planting daffodils each fall. And I wanted a baby. I had frozen my eggs twice. In 2016 I started applications to adoption agencies. Perhaps together my baby and I could start a new phase and move to South America.

“What are you waiting for?” my little cousin and mother of (now) three asked me.

Was I waiting or was I scared? I felt paralyzed. My eggs were going to get freezer burn if I didn’t hurry up. But oddly, I’d sabotage any potential of realizing my dreams with a partner by scoffing at the earnest, good men that might have wanted all the same things I did. They were just too… “eager.” The therapists threw up their hands. I threw back more whiskey.

Then at a party identical to all the others, I stopped. I stopped drinking mid glass, stopped small talk mid-sentence and walked out.

What was I waiting for?

I joined The Single Mothers by Choice Facebook group, and decided to have a baby on my own. I was still dating- but someone conveniently ‘unavailable’. He was a confused, but decent dude with a little boy going through a divorce.

I became pregnant by Mr. Unavailable. In the two seconds it takes to read a pregnancy test, my life trajectory changed 180 degrees.

“Family-in-a-box to go?” the universe asked.

First I panicked. Then I embraced my gift.

It was a much harder life (family-in-a-box has confusing packaging) but one I found much more meaning in. Things stopped being about me and who would see me in which outfit. After all, Gap Maternity only has so many styles.

My life became about HER (my daughter) and US (my daughter, partner, and stepson). I soon learned what married people referred to as ‘work on a relationship.’ There is no “One” unless you create it together.

And by create, I mean do the work. Two people need to man a jackhammer through concrete to get their diamond. And the “one” changes! So you need to change too. Change. Work. Me? Yes.

We moved to Marin county, north of San Francisco and I got my simple suburban mom life. However, other suburban moms who are juggling careers and kids will wink. They know it’s about as simple as solving all sides of their kid’s Rubix cube at the same time.

Now we dance until dawn while washing sippy cups, preparing lesson plans and completing powerpoints for all the great ideas we still have. And oh yes, we also work at a relationship too.

Sometimes I miss my gold heels. But my feet don’t quite fit in them anymore. Does any suburban mom?

So I guess this all means I’m going to start writing again. To you. With raw honesty. But not so much about finding the one.

I’ll write about finding yourself. And working hard to create the one… or a family….or a career….or a book….or a trip to South America…..or all five.

(PS. I still enjoy wine and whiskey. But in that elusive term called moderation).