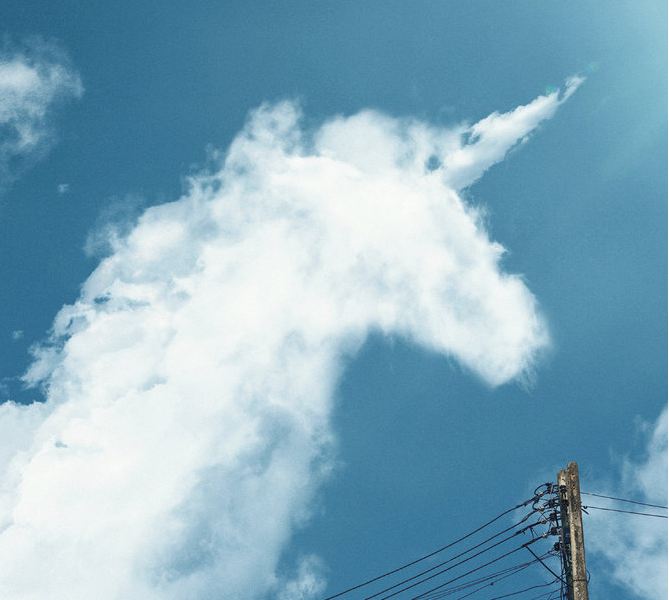 Is success defined by finding the elusive Unicorn? Or love? Or just being happy with a mere burrito?

“I don’t become friends with people that are not successful,” he said.

I chewed my burrito slowly, wondering what on earth he meant. Was I successful? He likely wasn’t referencing my ability to down an entire cheesy bean tortilla at 2 in the morning.

‘Success’ in the startup-rich, funky-dressed, every-changing San Francisco, is a laden word. It generally means achieving the near impossible, which of course, makes most of us feel like failures in comparison.

1. Starting a company that becomes a unicorn.

2. Writing a top selling book about the unicorns.

3. Getting a last minute ticket to Burning Man where you are dressed as a unicorn at the Unicorn camp.

4. Getting married before you hit 35…hopefully to a unicorn.

In other parts of the nation it could mean a marriage (to a mere mortal) with 2 children, a lake house, or making your car payments on time.

I wasn’t sure how to define success for myself. Perhaps by meaningful work,surf adventures, and a healthy supply of Tacquerias? However this wasn’t enough for the Unicorn dusted circles I traversed. I was told I needed to upgrade my definition pronto or I’d have to leave “Silicon Valley” for the “Carcinogen Valley,” home of the ‘has beens’ and ‘almost were’.

“C’mon. You need to strive for more, Heidi.”

I evaluated all the possibilities that Success 2.0 could encompass and I felt myself coming down with an anxiety disorder. What if I didn’t make the loftier definition?

Every time I feel like I’m doing A-OK, content with my creative career, eclectic friends, and endless supply of Mexican food, someone ‘more successful’ makes me falter in my path. Sometimes it’s an aspiring Unicorn and other times it’s a poised married woman with enough Unicorn equity to allow her to spend the rest of her life on an island…or on her Pilates machine.

Me: “Um. Yes. But I do have a place in Lake Tahoe. Of course it’s usually occupied by my other friends that still rent.”

Lulu lady: “You have OTHER people in your house? Darling, isn’t it time you either got a promotion or got married so you could have children occupying your bedrooms?”

Married people always ask these types of questions as if I have a genetic disorder; some mutant gene that promotes unexplained happiness with independence. I try to defend my life choices, but end up sounding like a Tampax commercial where I’m freely running through fields of international flowers haphazardly accepting love invitations. Once I fell head over heels. But unfortunately, love has steep competition in San Francisco. Timing and Ambition are worthy adversaries and hearts get repeatedly trampled by the golden hoofs of unicorn dreams.

Lulu lady: “So basically you are still living like you’re still 28 in some mythical Never Never land.”

Lulu lady: “And you are happy?”

A wave of guilt washed over me. Despite questioning if I’ve achieved ‘success’, I was happy. I wondered if she was.

Living in the San Francisco / Silicon Valley area for over ten years has allowed me to know all sorts of people; Unicorns and their Pegasus spouses, employees at Unicorn companies, Dinosaur companies, and multiple dreamers that subsist on hope and water. It’s inspiring, stressful, and…lonely. While most of the successful elite can wallpaper their bedroom with million dollar bills, many are still striving to find happiness. With money, things come easy. And when things come easy, they don’t always mean as much.

One success story confided in me, “It’s weird because I can just buy stuff without thinking. I don’t have to save or wait or even care. But what is weirder is that everyone wants to be my friend now, even girls that used to ignore me. How do I know if they truly like me as me?”

In communities where people have less monetary success, affection is rarely feigned. In addition, these communities weave a network of support where everyone helps each other out in order to survive. In Montana, where I am from, people happily take one another to the airport, make each other dinner, and wallpaper each other’s room with elbow grease. In time pressed cities, we are tempted to throw money at things, hiring each other black cars and food delivery, rather than make time to foster an intimate connection. Intimacy scares us. One time when I picked a guy up from the airport he freaked out, claiming that our relationship was ‘moving too fast.’

According a local therapist, a growing number of therapy hours are spent helping new millionaires cope with instant riches, combat their augmenting loneliness, and hunt down the elusive ‘life meaning.’

Can’t every day have meaning? Perhaps we all need to reconsider other types of success. Hey, don’t get me wrong, wealth is nice. It helps us take care of the people we love and buy more tacos. However, just like marriage, I feel it’s best seen as an outcome, not as a driver.

1. A full heart that is open to possibilities with non-mythical creatures (and companies)

2. A loving community of friends that give the gift of time. i.e. They’ll forget about ‘on demand apps’ and will personally pick you up from the airport, water your plans, and help triage your text messages exchanges

3. Thinking of marriage not as just to one person, but to a whole community

4. Multiple taquerias less than 2 miles away

Ok-I know writing this list is akin to making out some Hippy ‘To Do’ list where you’ve already completed most of the tasks. Yet, if I go by a list of what I have, then I feel successful. If I make out a list of everything I don’t have, I start to feel crappy.

Success should equal happiness. And happiness is best defined as wanting that which you already have. By defining your success based on your unique values and passions, it’s much easier to feel you’ve achieved it.

“Success is not the key to happiness. Happiness is the key to success. If you love what you are doing, you will be successful.” — Albert Schweitzer