Marry A Man Who Doesn’t Read 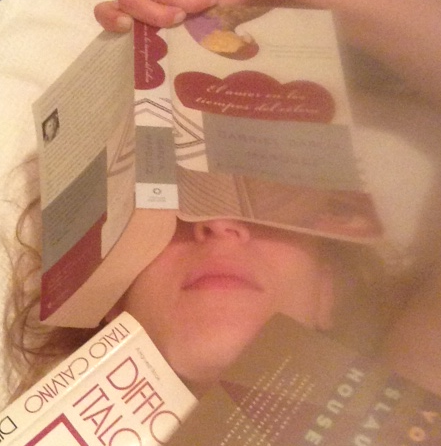 In the spirit of Date an Illiterate girl and to show two sides of a Sliding Doors moment, I’ve painted a picture of a few possible outcomes for the choices we make in love.

Marry a man who doesn’t read literature. Or paint works of art or make music. Marry this man for he is as safe as his spoon fed television with predicable plots, canned laughter and happy endings.

Meet the man who doesn’t read literature at a trendy happy hour where you toss your hair like you’re flirting and he buys you a “Sauv Blanc.”  Size up his income by the watch on his left hand and decide he’s the one.

Go home with this man to his place but ignore the scantily clad bookshelf that contains titles about successful habits and good to greatness and how to use chopsticks. For these, not a haiku collection, mark success. Have sex on his black leather sofa and claim you are girl that never does these things and he must be special.

Let him take you to dinners at fashionable places where you order the salad with pine nuts for protein and fat free dressing on the side. Listen to his dream plan of corporate ladders, season tickets to the niners, and how he hopes to settle down and buy a place in the suburbs and take care of you while you pop out children with his DNA.

When you tastily lick your cabernet glass clean, suppress the urge to deplete the bottle, coat your throat with meaty red and dive into artistic drunkenness. Stop. Let him pour you water. With him, you’ll stay proudly sober and never spill wine and spew run on sentences with emotional frenzy. Learn to put your fork down after your salad and not beg for dessert so he knows you’re restrained and will stay slim forever.

Stop using overcomplicated words, Sartre quotes and hedonistic references to “The Playa”. Get you teeth professionally whitened to hide signs of midnight cigarettes and afterhours espresso and take up grown up things like Pilates and lunching.

Let him propose with a perfectly formulated solitaire that weighs down your left hand with a permanent ache. On cue he says “it’s not a blood diamond” from a African country you’ll never visit and you smile and cry as if this were your biggest life aspiration.

Get married in a church with bridesmaids in dresses that match your flower arrangements and walk down the aisle in perfect beat to Here Comes the Bride and suppress all desires to jump on the back of someone’s motorcycle and escape to Mexico to let your hair stream wild in the wind.

Buy a house together that has bedrooms for your future children and is near a specialty grocery store with organic deli meats. Let moderation beget moderation and settle into a predicable pattern than makes your parents finally stop worrying. Rent out your one bedroom condo where you thought you’d once die alone with  twelve cats and three hundred books. He has saved you.

And days turn into months and months turn into years and eventually he’ll get sick with a preventable disease and you’ll wheel him in his chair and feed him mush and wonder what would have happened if you choose the man with the cheap watch and velcro wallet.

Don’t Fall in Love with a Creative.

Don’t even give him a second glance. For if you succumb, you’ll never be safe.

Instead you will ride the waves of passion and despair, never knowing when each will end. You’ll become an addict to drama and a skeptic of the conventional, unclear how your chaotic patterns could ever formulate a linear life progression known as the American Dream…even though sometimes you secretly covet it if only for a chance to breathe normally.

Don’t fall in love with a writer.  He’ll haunt you from the first day you meet with brooding eyes and dark hair and a T.S. Eliot paperback neatly packed under his left arm.

You’ll meet him at the one remaining wifi-less coffee shop and he’ll quote existentialist writers to describe the moment until you leap over your foamy cappuccino to kiss him violently because nothing is more seductive than a man who appreciates syntax.

Don’t fall in love with a writer because he knows great love stories have tragedy and the best are killed off or at the least cast aside and and he says goodbye to his favorites as easily as he sips his black coffee.

He’ll teach you that monogamy is a word for young adult novels and life is so much more complicated filled with chance happenings and twisted plots and unwanted surprises…some named Jolie, his assistant. You’ll have heartbreak so great you’ll cower on your floor for three days. “It just makes a better story,” he says.

Ignore the irony of a writer giving you a cliché.

Don’t fall in love with a painter. He’ll lure you with temporary adoration when you meet at a two bit gallery opening and he’ll woo you by asking to paint you nude. You nervously agree (how conventionally unconventional, you think) and enter his easel of a house and fall into soft vulnerability as you stand near the sun soaked windows allowing your stomach pouch from too many chocolates to be beautiful.  He commits your body to memory as his brush traces the outline of your curves in perfect silence. For an instant you are his muse.

He’ll teach you how to see things differently like how moths wings shimmer at dusk. When drowsiness tickles your forehead he’ll say “Sleep is for the dead,” and you’ll traverse the streets making up your own constellations.  3am will become a delicate strand of a spiderweb, glistening in the moonlight with its fragility. You want to gulp down the moment in a frenzy as because nothing was this good ever and you fear its impermanence so might as well get crazy high on each second…

And then the moment is gone, the blue phase over and another has begun.

Don’t fall in love with a musician. You’ll be a groupie of his genius lyrics and soulful strums but you’ll always be second to his art and his public for his job is not a job but a passion that torments his soul like a cancer.  Which is why you love him.

He’ll play at odd times and introduce you to odd people and odd substances that keep your eyes wide and heart racing and in the morning you always wonder what the hell happened until you put your head in the nook of his shoulder and feel safe like a small leaf on an oak tree until the music starts and you once again become the second fiddle.

Ah yes, don’t fall in love with a creative. He’ll desperately need you then not need you at all and the pain from this very matter of fact statement torments like the beat of the rain on your single paned window.

And you may never marry because that’s too traditional and you may still die alone under your books with cats eating away your eyeballs. You ride the waves unknowing how this passion endures or your life unfolds. And you wonder if it had been better to date an illiterate man with a nice watch instead.