When Lying is Better Than Truth 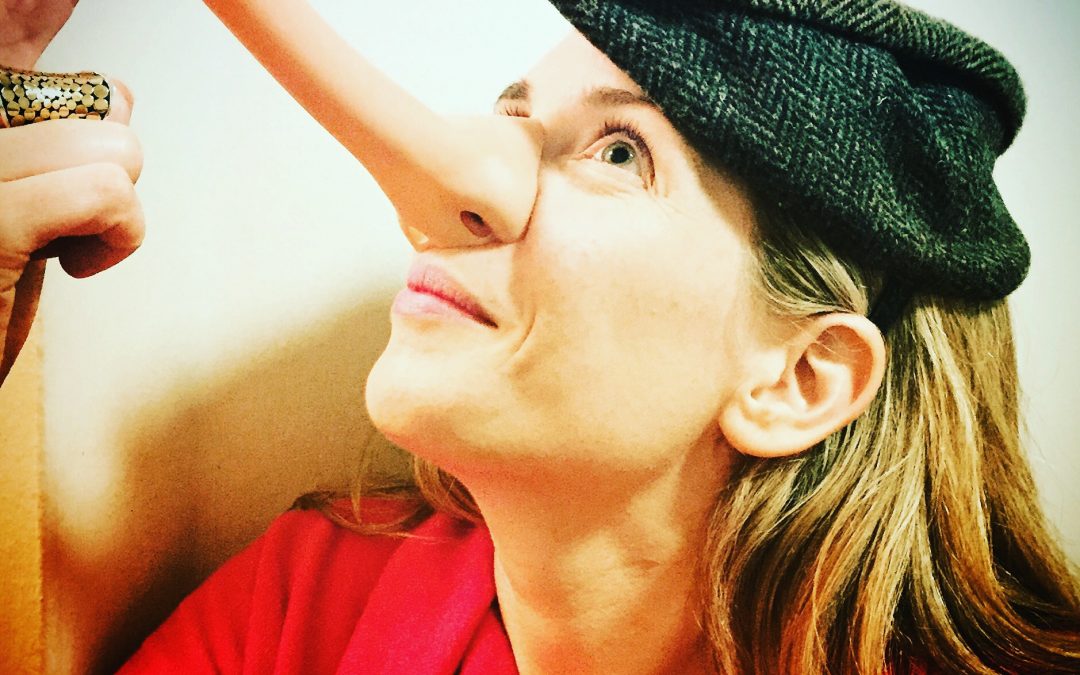 Last week, I lied to all of you. Ok, I didn’t lie. But I certainly didn’t share the whole truth, which is almost the same thing.

An old friend pointed this out to me while we were catching up downtown.

“Heidi, what the hell was going on in your last post?” Like any good friend, he knows when I’m not telling the “whole truth.”

A glass of wine had loosened my mouth so I explained.

“Why didn’t you just put it all out there?” he asked.

The truth is I didn’t tell the full story because I was scared. It’s easier to hide behind metaphors. It’s harder to put myself out there, especially in stories where I don’t end up looking as glamorous as I aspire to be. However, if I truly believe that an open world is best, than I need to be more truthful even if it feels like I’m walking around San Francisco without any clothes on. Plus I owe you more than a metaphorical strip tease.

The truthful impetus for last week’s Medium post went was based on a fleeting, yet revealing encounter. Here’s the simplified story:

A colleague rushed up to greet me, face flushed with the excitement of a first date. She told me her new beau knew me, and the “He” happened to be none other than my ex-boyfriend. When I revealed it was HIM (“him” as in, “him, the one who broke my heart”), my colleague went pale and looked like her sweater just got itchy.

“I had no idea. He just said he knew you from Montana,” she said.

Montana? I mean, I was born in Montana. My relatives still live in Montana. But I’ve never seen him in the big sky state. It wasn’t the fact that my ex-boyfriend was dating other people that was hurtful, but rather the fact that he lied, brushing off my entire existence with a random, and incorrect word association. It made me wonder if our entire relationship was a figment of my imagination. Or worse, if he was covering up the truth out of embarrassment. I felt I should be a status symbol of past girlfriend awesomeness, not some dirty secret from cowboy country.

Jake rolled his eyes. “No, no, it’s not like that. Most guys just want to get laid. And referencing an ex on a date isn’t going to help that cause. Or maybe he just wants to create a positive experience and not end up as another terrible Tinder encounter. Then he needs to keep it easy breezy and not conjure up visions of you writing poetry naked.”

The irony is that I’ve lied to you again. My old friend Jake isn’t just an “old friend.”

I asked him, “Do you tell people WE used to date?”

“On a first date? No way. Well, unless it comes up. And then I’d say we know each from…er…Tahoe and bury our past dating status under a hundred other details like skiing, bird watching and our super platonic friendship.”

Apparently the idea of dating me as a status symbol was completely in my head, just like most of my past romantic relationships.

Perhaps the decision to tell the truth looks something like this:

Of course, this diagram doesn’t have to be about dating. You can replace the ‘getting laid’ box with a ‘work promotion’ box and it still will read about the same.

Of course neither of these diagrams account for the probability of someone finding out you lied…which is a good way to get fired AND be alone. But if you play the odds, lying can get you further “ahead” in life. Sometimes it helps you protect someone else (“No honey, you won’t gain any weight if you eat the entire cheese wheel”), but usually it serves to protect yourself. (i.e. If you insult the cheese wheel eater, you won’t get laid.)

Sadly, truth tellers never seem to fare as well on the Darwinian scale as the lying champions. Unless, of course, they are lucky enough to be surrounded by people or a company that places a high importance on raw honesty. Unfortunately, an obsession with naked truth telling seems to only make up about 8% of the US population. France is ahead of us at 16%*, mainly because nakedness is a big part of their culture.

Perhaps it is due to my French / Montana Grandmother, but I’ve always felt the truth is better, no matter what the cost. Granny and I try to have a greater morality than a snail. I mean, we EAT snails. The truth may not get us ‘further ahead’ in a conventional sense, but it will provide deeper connections, a better night’s sleep, and unparalleled freedom to be who we really are. It must get very claustrophobic hanging out with a crowd of lies.

The downside of reckless truth telling is treading on people’s feelings and revealing too much, making others uncomfortable. “Sharing is caring, TMI is love,” Granny and I say. The trick to TMI love is to add in kindness like a fabric softener. Then no one’s sweater gets too itchy. Even so, the truth may not always get us to our end goal. But rest assured that if we say we know someone from Montana, we actually do know them from Montana.

Of course, I’d like to say I’m honest all of the time and am increasing our national honesty rate up to 9%. But that would be a lie. I still cleverly mask information and write distracting poems so I don’t have to always reveal what’s in my heart. I mean, if I revealed everything on a first date, there’d be nothing left to discover on date two. So perhaps if I really like you, I’ll over reveal some things, but I’ll also lie, just a teensy tiny bit. And if you really like me, you’ll take the time to strip off my lies, one article at a time until I’m fully naked.

*There is absolutely no reputable source for this information except my personal experiences.