Burning Man Lessons from A Newbie 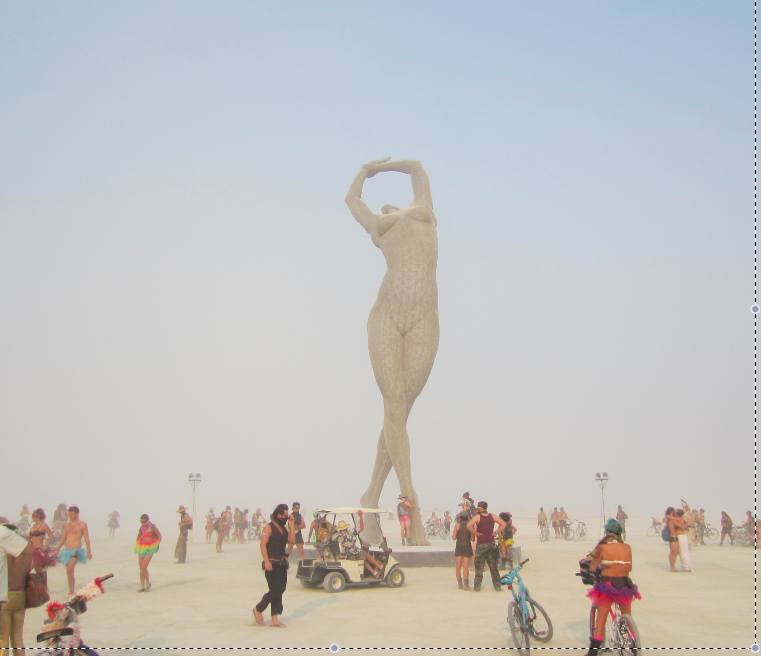 I loathed the people in San Francisco that called themselves “burners.” You know the type-those wide eyed patchouli wearers that made arcane references to “the playa” and found random “burner friendly” events throughout the year where they could wear tutus, wave glo sticks, and relive their “playa” experience?

Then last year my friends convinced me to go,

“Well, yes, there ARE crazy armpit hippies,” said a friend. “But there is a lot more too.  Music, community, gifts, art, painted naked people… trust me—you’ll transform.  It will be good for you.”

“Hmmpf,” I thought.  “I wear Jimmy Choos and Versace. I may go, but I will NEVER become one of those crazy naked painted people.”

I was on the playa for about 24 hours before I became a gleeful naked painted person. I frolicked the dust. And I wore a tutu.  Did Burning Man transform me?  Or did it just make me peel off layers of social mores and rules and become more of who I already was?

It may just transform you too…..

Burning Man’s Black Rock City is an annual festival in the desert that has over 60,000 people in attendance.  It’s 110 degrees during the day and 40 degrees at night. There is no running water or electricity, just crazy theme camps with people in scantily clad costumes.  People come from all over the world to put up art installations, play music on large stages, create “art cars” (decorated vehicles in the shapes of fantastical animals and two level dance platforms), dance and make meals for those around them.  You must accept the extreme conditions, extreme people, and extreme experiences.  The only thing you really need to bring is water and an open mind. There were a few times where I found myself becoming judgmental…and I immediately course corrected.  Burning Man teaches you to let go and just accept how weird everyone is. The best part about it?  You get to be weird too.

They say that anytime you make plans, God laughs. In Burning Man’s Black Rock City, planning was a recipe for disappointment. There were no cell phones or email, just multiple camps begging you stop what you were doing and join their festivities. On my second night there I was at dinner scanning the crowd for my friends at our agreed upon hour.  I had just taken a magic mushroom at the agreed upon time. And then I panicked.

Oh no! Was I too punctual? Had I taken it at the WRONG TIME?  What if my friends took it 32 minutes later?  We would all be off schedule for the art car outing!

I panicked, so upset with my mushroom timing that I was missing my evening.  “Stop seeking, “ I told myself.  Just BE HERE NOW. I realized I didn’t know how.

My little cousin randomly found me as I sat on a bench mourning my schedule.

“But I’m going to be in my own little mushroom world.”

“But what about my friends and our meeting?” I pointed to my watch. “They’ll be here any minute.”

She laughed and made me take off my watch. I threw it in the dust. We jumped across art cars to make it to a mystical dance event.  After she left, I rode my bike aimlessly across the sands and met up with a French Canadian who brought me to an event in the Temple. I finally let go of what was supposed to happen and open myself up to what COULD happen. 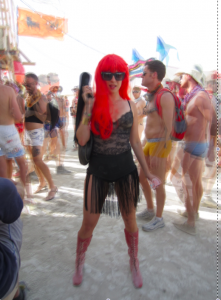 A year ago at an Esalen meditation retreat I learned that the only thing permanent was impermanence. In Black Rock City, nothing lasts- not the music, not your group of friends, not your state of mind. You must seize the moment you are in, licking its insides and then gracefully let it go once the wind picks up and you are carried away to something new. One night I fell in love with an Italian man dressed in a wolf headdress. I was convinced he was “the one.”

We danced until the wee hours and made plans to find each other again the next day.  But how? Could I place a “Missed Connection” in the Burning Man Daily?

My friends urged me, “Forget about the wolf man. Wrap the moment in a bow and move onto the next treasure the desert presents you with.”

If things on the playa were meant to last they wouldn’t be so special.  Not committing was foreign to me but I was in a foreign land. I had to let go of the American notion of “ever lasting” and instead embraced “ever changing.”  Allowing change was the best way to avoid disappointment.

Black Rock City is built upon a premise of gifting. There is no money, no bartering, only gifts to be freely given without expecting anything in return.  As I pedaled my bike through the dusty roads I was offered jasmine scented mist showers, foot massages, watermelon slices, champagne, and rides on an orgasm machine.

All I had were some silly quotes and fortunes written inside plastic gold eggs -a seemingly silly comparison to the alcohol and sex others offered.

I was too embarrassed to pass them out until my new art car friends urged me to. In the remote playa we found a “Maze.” The maze was a 50 x 50 room filled with white shag carpet and white streamers hanging from the ceiling.  “Find people in the maze and pass them out there,” said my new friend.  I shyly walked through the streams, pulling them apart to make my offering to people.

“Would you like a fortune egg?” I asked, feeling ridiculous.

A girl in a pink bunny suit opened the egg and pulled out my piece of paper with semi legible writing.

“This is exactly what I needed to hear,” she said and gave me a hug.

I looked down at what I had written.

She must have been on acid.

“I wish people who have trouble communicating would just shut up.” — Tom Lehrer

Um foiled again. What was wrong with the quotes I had written?  They were as inspiring as a tuna sandwich. Hoping for something more special I offered her a third with a smile.

“Don’t wait for a light to appear at the end of the tunnel, stride down there and light the bloody thing yourself.”— Sara Henderson

“I think this quote is telling me that I should help you write more quotes,” she said.

And we sat there, in the maze, quote writing, and laughing, and become fast friends.  And that was the best gift of all.

I always write about ‘naked’ in terms of internal nakedness.  For me, this is easier than being externally naked. As a woman, I always monitored my body—frustrated that my desires for both chocolate and flat abs were in constant battle. Since chocolate would always be in my life, I found clothes a necessity to mask imperfections.

But then, one early morning I urgently needed to use the restroom. I had slept the nude (it’s HOT out there) but was too tired and frantic to find my clothes and decided to trek out to the porta potty naked.  Surely no one would be out at 6am.

Everyone was out at 6am.

I breathed a sigh and scampered to the porta potta mecca down the road, attempting to suck in my stomach and stick out my chest at the same time.  I then tripped, lost all composure, and fell into a dusty version of ‘bad naked’.

Someone stopped me as I picked myself up. ‘Are you okay?’ she asked.  As I meekly nodded, she added. “Well, I just have to tell you that you are the most beautiful woman.”

I was convinced she had dust in her eyes but quickly realized that I was the one who couldn’t see straight.

Everyone here on The Playa was beautiful.  People were so confident with their bodies that they brazenly adorned and displayed them, fully appreciated in each size and shape.  There was no shame, only pride.  I thanked her and concluded that in the case of clothing and beauty, perhaps less means more.

At Burning Man there is every type of person and every type of experience.  There were yogi camps and music camps, kids camps and gay camps.  You could meditate or dance, drink or fast. Somehow it all worked beautifully together and all eccentricities were accepted. Not once did I even think to ask what anyone did for a living or how many stamps they had in their passport. I instead asked about dreams and ideas, especially interested if they were different from my own. When I finally walked by the hairy armpit hippy camp, I didn’t mock it but instead smiled.  They made up part of our universe. They also gifted really nice muffins. All in all I had an amazing experience.  And I’ll be back. The only thing I’ll do differently is bring better fortune eggs. 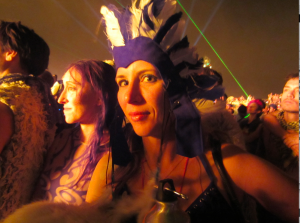