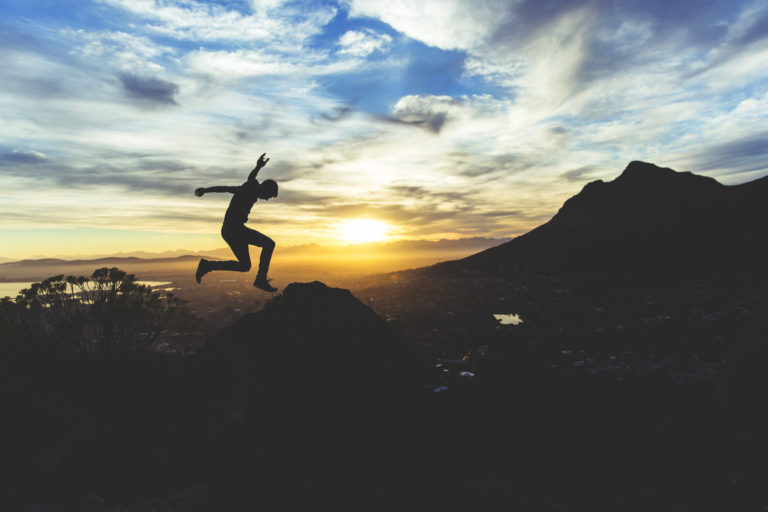 “I love her, but I’m too afraid to tell her in case she laughs.”

All these were quotes I pulled from Scaredy Cats Anonymous, a dimly lit place where people release their qualms and take shots of courage to make a leap forward in life. Fear, like love, is a powerful force that shapes our life. A little dose can protect us from peril. But if fear overflows and becomes greater than love, it paralyzes us. We become incapable of seizing the life we really want…even if it’s right in front of us.

Many people I advise are blocked, either in love or work. They want to make a change, yet cower in fear of the unknown. Grasping for excuses, they blame their fate on that elusive female, Lady Luck.

“Everyone else has it so easy,” Brad said. Brad was blaming his stagnant life on the lack of silver spoons in his upbringing. He felt everything would have been different had he just gone to an Ivy League school or been endowed with a trust fund. “Then I’d feel prepared to start a new business,” he said.

No one has it easy. Anyone in Silicon Valley will tell you that most entrepreneurs do not start with money or have a romance with Miss Luck.Their drive, passion, and scrappy mentality pushes them forward.

People that have happy marriages aren’t always products of fortune either. Many don’t have a stable upbringing or clean past. They just decided to jump and figure it out. Love overcame fear.

Based on my own ‘fuck fear’ journey as well as hundreds of interviews over the past six years, I’ve found that “jumping” entails multiple motivators and mind shifts. Courage, after all, can be cultivated.

CHANNEL IMPETUS TO DRIVE YOU

For starters, find something that has enough meaning to encourage you to jump in the first place. For me it was the desire to write people’s stories. The urge to gather juicy parts of other people’s lives was so strong that I left my stable career, city, and boyfriend to drive all over the US for months, blogging about the people I met. Starting over in my 30s wasn’t easy, but saying no to my passion was even harder.

Your impetus can be a passion, a person, a job, or in Crystal’s case- a cause.

While on my roadtrip I interviewed Crystal, a former Katrina disaster relief worker. Crystal had left her career, owning a high end salon in San Diego, to volunteer after the hurricane struck. Her impetus: “watching the horrors on television and the need to do something.”

“My original plan was to volunteer for one week,” she told me. However, after two days of working Crystal changed her mind. “It was total devastation and there weren’t enough people to help. I couldn’t just turn back so soon.”

What was supposed to be a couple of weeks turned into years. Crystal’s work in disaster recovery mattered so much that she quit her beauty career. Not that a haircut wasn’t altruistic, but she felt she was creating more meaning down south, rebuilding people’s lives.

Her ‘jump’ changed her life. “I met wonderful caring people from all over the world. I felt so fortunate to see this beautiful slice of humanity.” Crystal also met the love of her life, a firefighter, that had worked in the trenches of Katrina with her. “I was in my 50’s and had given up on men…and suddenly it happened!”

In Crystal’s case, love didn’t just overcome fear but gave birth to more love, over and over.

You cannot be plagued by other people’s definitions or you will always feel like a failure. Crystal stopped viewing money as her criteria and looked to meaning.

‘Success’ in the startup-rich, ever-alternative San Francisco, can be a terrorizing term. It often becomes the altar in which people sacrifice their souls. They relentlessly pursue Unicorn startups, Unicorn spouses, and even Unicorn Burning Man outfits.

Before I left on my road trip I was paralyzed not just with fear, but also with status anxiety. I had rushed to keep up with the Joneses and the Zuckerbergs without really knowing what I was rushing toward. Plus no matter what I sought to achieve, half of my Facebook friends had already done it and instagrammed it. To be happy in San Francisco, I had to shrug off people’s polished social media feeds and define success in a uniquely personal way for me.

At the time that meant taking my shitty Honda Civic across the United States, eating roadstand tacos, and interviewing anyone that would talk to me. For others, it’s making a career around their passion, or just spending more time with people they love.

Two years ago my friend Adam left a high power tech career for a “boring one.” Instead of spending time in fancy hotels doing deals he felt he was more ‘successful’ if he spent time with his family.

“I decided that the most important thing in my life was to be able to eat dinner with my son every night. This meant no more traveling. I brought home a lot less money, but a lot more quality time. When it was time to ‘Jump’-I jumped to a desk job. Probably not the sexy jump you want to read about, but it was the jump I needed to do.”

At first Adam worried the salary decrease would be hard to manage. He also feared he would be judged by his peers. But after he jumped and landed, he figured it all out. He also made new friends with similar priorities, including a few stay-at-home dads.

It’s important to surround ourselves with people that have similar goals as us. They become our cheerleaders, our commiserates, and our inspiration.

To help motivate us for a jump, we need to create a little pre-party with our like-minded fans to amp us up. Remember the pre-parties you’d go to in college before the big football game? Life is no different. So get the drinks flowing, music pumping and find your cheerleaders.

After I got back from my writing roadtrip, I decided to commit my life to words. I joined the San Francisco’s Writer’s group, where we met each Tuesday to critique each other’s work. Now, writers use praise as sparingly as my Grandmother used new ziplock bags. They tore most of my pages up. But one week they highlighted a section and said, “Heidi, maybe you finally have something here…”

That little “maybe” was just what I needed to re-start my book.

REMEMBER-COURAGE ISN’T A ONE TIME EVENT

No matter what blogs we read or who we hang out with, the choice to jump is still ours. We just can’t count on Lady Luck anymore. That fickle gal hopped off with the Easter Bunny. It’s left to us and it’s left to us repeatedly.

Why? Because we might make a jump and not land the first time. We may tell someone we love them and they’ll laugh. We may start up a lifestyle business just to close it down a year later. Our dream company may not want to hire us. And our peers will definitely judge us.

You have to keep going. After each failed landing be prepared to lift up your heart off the floor, stitch it back up, and try again.

Stamina is a muscle I’ve developed over the years. For example, I’ve fallen in love multiple times. Don’t get me wrong– heartbreak is painful as fuck and I’ve held staring matches with bottles of sleeping pills on more than one occasion. But somehow I always manage shift my gaze to an old Khalil Gibran book. His poetry fuels me to try again.

After each break, my heart opens wider and I’m able to love the next person more than the last. Some man someday is going to be very lucky– he’ll get the heart of a blue whale.

I’ve also left corporate jobs multiple times to pursue another love — travel writing. After my roadtrip a New York agent contacted me for a book deal. The deal talk lasted about a month until she told me I “wasn’t quite good enough” and that I should abandon ship and return to my desk job. For a while I did. But a year ago I remembered that ol’ whale heart, pulled out the old manuscript and started typing again.

You see, I’ve redefined success not to be a NY Times bestseller or a long speaking tour. It’s just writing every day. And dammit, I’m going to keep doing it no matter what anyone tells me.

I don’t have the fancy agent anymore. However, everyone once in awhile I get a letter in my inbox from a random person who reads my blog. Last week it was Kathy from Wichita who told me I spoke to her soul. If I can touch even one person, then every keystroke is worth it.

Like many jumpers, my life is not traditional. I didn’t settle down or seek monetary success. I put more passion into the right adjective than the right salary number.

It’s HARD fighting fear and going against the grain. Some months I don’t know how I’lI pay my mortgage. I’m often judged of ‘wanton TMI’ and friends abandon me, fearful they’ll appear in my blog under a poorly constructed pseudonym. I spend every other Tuesday crying of loneliness, wondering when I’m finally going to “have it all figured out.” But then I wake up Wednesday morning to a beautiful sunrise. I become overwhelmed with the day’s potential and start a little 6am pre-party for the day’s jump ahead.

*this post also written for ‘When to Jump’ in the Huffington Post , encouraging all people to leap to their dreams.