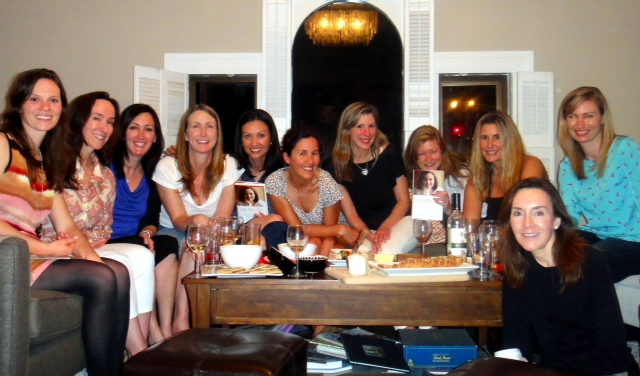 I was invited to a book club to talk about Sheryl Sandberg’s book, ‘Lean In’. True to Heidi fashion I read the entire book in a cram session 24 hours prior, spilling coffee and makeup all over the cover. Sigh. Not very Sheryl Sandberg like.

Regardless of the stains on its cover, I thought her book was fabulous. It spoke to the struggles women face trying to balance careers and families as well as our hesitation to believe in our abilities and speak up in a male dominated workforce. We need to change our thinking. She writes, “women are surrounded by headlines and stories warning them that they cannot be committed to both their families and careers…..the good news is not only can women have both families and careers, they can thrive while doing so. ” Unfortunately most of the world hasn’t yet caught on.

According to her book, a lot of the problem starts with hard coded societal perceptions of what it means to be a woman and the roles we should play. If women are to be true equals, we need to hire an global ‘thought electrician’ and completely rewire our attitudes about how both men and women interact and pave a new path forward.

I Need a New Type of Love….

When I was 20, I fell in love with a German PhD student and hastily moved to Germany with him, temporarily dropping out of college to learn German, teach English, and make the man hearty pork dishes. While whipping up another batch of Sauerbraten, I would secretly pour over issues of the Economist, missing my academic world. One night I remarked that I’d like to go back to school and eventually get my MBA or PhD like he had. He laughed out loud.

“Doktor Heidi?!” he mocked. “That’s funny.”
“I’m serious. I want to DO something…” I retorted.
“Heidi, you’re pretty. Pretty girls don’t need to work. Plus you’re with me. I’ll ensure you never have to.”

I walked out. I didn’t want to be someone that didn’t need to use their brainpower. I returned to the states, got my degree in Business Economics, and landed a job in strategy. A few years later, around the time I was debating getting my MBA, I fell in love with another man. I was head over heels Bambi like twitterpated and probably would have sacrificed my entire life to be with him had he not dumped me first. The main reason? He thought I was too career focused.

“Hey, I’m the man. Why do you care what you do for a living? Don’t you want to have a garden and babies?” he asked.

Of course I did! I also wanted to cook lavish dinners, take exotic trips, AND make powerful decisions to impact the world. Why wasn’t that okay? Or more importantly why did it turn off my boyfriend?

The breakup devastated me. I felt like I had failed. I suddenly felt enormous pressure to choose between being married with a garden and having a career with an income. I panicked and (naturally) fled to South America to finish my Masters. I hoped latin metaphors, sultry dance, and copious amounts of Chilean wine would provide the answers to my life. My latin lifestyle mainly provided a hangover and I soon moved to the more sober, sophisticated, and career focused San Francisco to see if I could solve my conundrum. Wasn’t it the mecca of strong, successful women who also had a romantic life?

Being Successful Doesn’t Mean Buying a Strap On

In San Francisco there are indeed many accomplished women. Hurrah! Unlike the meek women Sheryl Sanberg refers to, almost all speak their mind and “sit at the table.” However, I don’t think they have won the equality battle. Many think they need to “plow ahead” by behaving like a man. They chide my affection for high heels and fashionable dress.

“If you look too much like a woman, you won’t be taken seriously,” they say. “Dress down to move up.” Argh.

It wasn’t just about outward appearance but also actions. A woman I once worked for told me that to get deals done I had to “pretend I had a dick and swing it just as big as the dudes in the room.”

I was not about to rush out and trade in my Jimmy Choos for a strap on. Couldn’t I stay feminine and still wield power? After all, men and women ARE different and have different approaches to life from creative insights to negotiation tactics. Aren’t the best board rooms balanced board rooms with a variety of vantage points? By acting like men we are saying that being a woman is less valuable. And by acting like men, it will be much harder to convince management that we need pump rooms, childcare, and other assistance to help make our balance easier AND encourage more senior level women stay in the workforce. We need to show that having a female perspective is an asset.

“Being feminine doesn’t mean being weak and dependent. It means embracing your identity as a woman.”

A good friend of mine that runs her own company refuses to give into masculine appearance and actions. Her best negotiations are done in a dress and heels with a soft, yet persistent voice. Who is going to argue with a woman that confidently knows who she is and what she wants? Own it, ladies.

Beyond the Book: “Lean In” To Crazy Experiences

Sandberg’s book is a great guidebook for planning career success. It is laid out in sections on choosing a job, a mentor, and a supportive life partner. However, I am not near as linear as that woman. Had I been more thoughtful and less bohemian throughout my life perhaps I’d have a C level title and an original Picasso decorating my living room. Instead I promote myself as a “runner, thinker, traveler” and have posters from college decorating my bedroom. My “lean in” path didn’t just focus on my career–it focused on, well, my life. I took many jumps into the unknown, and, much to the horror of my parents, turned down business opportunities to meditate in India and backpack in Tanzania.

It was through these experiences that I learned the most. I got a crash course in budget travel, developed empathy for other cultures, and met fantastic people that had uniquely different approaches to life, changing my viewpoints on what mattered. I learned to redefine success not as a monetary feat but as experiences and conversations. I truly feel this is just as important as rising up on a corporate ladder, if not more so.

After all, when we reach our deathbeds, we don’t want our fondest life moment to be a powerpoint presentation. Hopefully, it will be sailing across the Pacific with crazy travel mates, our supportive partner, and our children that we managed to nuture while balancing a career.

At the book club, I met 10 other beautiful, well dressed, and successful women. However it was interesting that while many owned homes, only one owned a diamond ring. Was it because they had prioritized their career over love? No. In fact all had aspirations of finding the right life partner. And all valued femininity, sexuality, and romance. The problem was that the pool of men that valued strong, independent women was small. “They don’t know what to make of us yet” one laughed. Another chimed in, “Yes, but the good ones are worth waiting for. They don’t want a doll. They want a partner…..a sexy partner of course.”

“My idea of feminism is self-determination, and it’s very open-ended: every woman has the right to become herself, and do whatever she needs to do.”
-Ani Difranco