Not Thinking About Sex in a Monastery 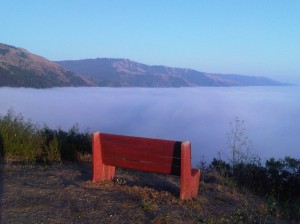 Hedonism and asceticism have always been fundamental parts of American culture. Never able to completely stay true to one path, we take turns diving into each, using one to wash us from the pleasurable guilt of the other.

The last time I had come this far down the coastal Highway 1 I spent a weekend at Esalen, a new age retreat where I partook in writing seminars, drum circles, and much to the horror of my friends, naked hot springs.  I was debating another such course but was reprimanded by my cousin, Lauren.  “Heidi you don’t need another writing class.  You just need to sit down and do it.”

Rather than losing myself in hedonistic pursuits, I choose the New Calmaldoli Hermitage, a monastic community embracing abstinence and silence.  Not drinking or talking may sound like my version of hell, but ‘heaven’ hadn’t been working out so well…

I grabbed my cousin, threw on my trusty red cowboy boots, and hit the sunlit road south to Lucia, site of the Hermitage.  The monastery was set into the hills that overlooked the expanse of the Pacific.  You could hear the waves crash and echo against the rocks creating a calming rhythm.  There was probably a recording studio nearby making the next “meditative sounds of nature” soundtrack to play in urban gynecological offices.

We were greeted by Patrick, a jovial white robed monk, who encouraged us inside the reception area. It was filled with religious texts, multiple Jesus paintings (solemn Jesus, happy Jesus, surprised Jesus, etc), and fresh baked fruitcake.  He explained to us that the monks passed their hours in revered bliss, gardening the small hillside plots, baking, cleaning, and praying. The Camaldolese monks worry that our modern life gives few opportunities for reflective solitude and thus they created meditative retreats for the public. The ‘no service’ area also indicated that Lauren and I would spend a weekend without the noise of Facebook, Twitter, and our cell phones.  Without such distractions we would gain four hours back each day.

Patrick directed us to our cottage and Lauren and I walked up a dirt path to a yellow octagon shaped hut with a cross on the pointed roof.  It came equipped with a bathroom, a kitchen, and a set of Rosary beads for each of us.

“Should we pray?” I whispered.

Lauren looked at me. Neither one of us came from a heavily religious background.

And we did. We happily wrote, hiked, and went to mass to chant with the robed men.
We were practicing respectful solitude.

I cannot say my writing was filled with as holy dedication as my actions.  I was working on a set of vignettes, creating characters out of lovers in case I needed to get over them.  There is something about being inside a deeply religious place that just makes you think about sex.  It was terrible.  Every time I tried to focus on maintaining a spiritual aspect of my writing, a giant penis entered my thoughts. I tried to write about “origin”, but the words “orgasm” kept appearing.  I blamed Henry Miller.  His old residence was too close; the monks’ gardens were built of off erotic soil.

When my hands cramped from writing, I headed toward the communal kitchen for nourishment.  Leaflets were posted about the food, ensuring us that the bread had been baked in silent holiness.  I wondered how monk’s bread tasted compared to loaves baked by the noisy, sacrilegious.  Other silent retreaters hovered around the kitchen, acknowledging my presence with a smiling nod. I wanted to ask them questions—why are you here, where did you come from, who do you love, but knew such banter was forbidden.  Here talking was overrated, a mere space filler to more profound stirrings in the soul.

On our last evening at the Hermitage, Lauren and I decided to leave religion for an outdoor bar 10 miles down the road to watch the sunset. The sun was already lowering in the sky, casting a golden glow over the sea.  We didn’t talk during the car ride, allowing our hearts to take in the smells and scenery of the Pacific.

At the Treebones bar, we greeted by a friendly waiter, Ethan.  Upon seeing an eager face I couldn’t help end the mute phase and opened my mouth to ask questions. Ethan generously answered telling us he moved here from Illinois, desperate to be near the waters.  He lived in a small brown trailer nearby and hunted for jade on his day off.  He didn’t know much about wine so Lauren and I had him pour different glasses of red so that he could smell the differences between them.  Silence may be golden but connecting to others is often more valuable.

We drove back to the Hermitage our stomachs warm with wine and conversation.  We debated if we should set the alarm at 5am for sunrise prayer or even earlier for a moonlit bath in Esalen’s hot tub.   After practicing silent reflection, we didn’t feel guilty for our occasional wayward ways.  Embracing life is about experiencing both sides of the pendulum.  Religion can be found in hedonism.  And writing is best done when unrestrained.  In the land of Henry Miller and the Camaldolese monks I realized that being true to oneself is the best type of spirituality.  And it’s that, not writing, that will help you get over (or get into) anything.