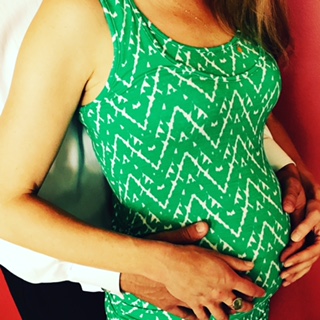 “I’m hoping this is a false alarm.” I texted the positive test results to my cousin.

“Holy Shit!” was her immediate response.

But it wasn’t a false alarm.

I was pregnant, not married, in an uncertain relationship, and just started a demanding new job that regularly took me out of my comfort zone.

Now, my whole life had catapulted out of my comfort zone.

It’s no coincidence that my weekly blog posts ended 3 weeks later. #humpdayHeidi was in over her head.

Writing, once my salvation, became a formidable task. My life became too overwhelming to share and let’s face it, even “unconventional me” was embarrassed to share my predicament. This just wasn’t how my life was supposed to work out. I no longer felt like the wise writer, but a scared teenager. Where was the confident Heidi who traveled the world with a surfboard and hiking boots, blogging about adventures? Back then wayward paths smelled delicious, not stressful.

Now my wayward ways seemed out of style. I had been dating someone wonderful, although he was divorced and our relationship was tainted with a few false starts. We had just gotten back together after a “break” with those people you meet on “a break” still lingering in the shadows. Would we make it…or would I join the single mother’s club?

My prospective job, although exciting, was brand spanking new. When the pregnancy results came in, I hadn’t even signed the offer letter yet. I’d have to sign for two…if they’d still accept me in a, um, larger form.

In addition, I was still living in a one bedroom apartment in San Francisco. How was I supposed to raise a child in 750 square feet with the nearest patch of grass blocks away? True, I had a home in the mountains, but that is not where my job was. And oftentimes it resembled the Muppets “Happiness Hotel,” with new savory mountain characters passing through on the weekends. Probably not the place to bring a delicate newborn.

The problem with not writing about what I going through was that I turned inward and lost the essence of who I was.

This move toward inwardness resembled the Muppets from the Dark Crystal.At night, vulture-like demons danced and crooned, threatening my confidence. “Your life is a mess of scraps,” they whispered. “You’re doing it all wrong. And hell, you have an MBA.”

I even began comparing myself to those “perfect people” on Facebook, with and without MBAs. Their lives seemed so fairytale linear. First an established career, then a destination wedding to kickstart a forever-lasting marriage, followed by a beautiful home and immaculate conception of several children dressed in miniature haute couture. These people should be writing weekly advice posts, not me.

“You chose this path,” my mother reminded me. “You never wanted that life. You chose men that loathed picket fences, gave up stable career ladders for creativity and impact, and you were open to a thousand ways to have children. Embrace living the life you chose.”

My mother’s advice is annoying when it’s right.

I had a choice-I could cower and complain or I could own my life. Shaky relationship, growing belly, new startup job, and all the thrilling moments that comes with an unpredictable Muppet style life.

Slowly my pen found a way to paper again. I wrote a blog for a friend and an article for work. Timidly, I started to open up about my vulnerabilities. I told my new boss and friends what I was going through. They opened up with their own personal challenges and surprisingly, totally accepted mine. They revealed their ‘un-social media’ lives. People had marriage engagements canceled, their own “surprise pregnancies,” and took risky leaps in their careers.

Finally my partner and I chatted…not so much about our start-and-stop past, but what we wanted for the future. Were we “in” or were we “out”? Through a lot of “we’re in” conversations, we realized that we didn’t need to get married or own a new home to be good partners or good parents. Some may think these were necessary foundational elements for a life together, but we felt we could use different starting blocks such as honesty, communication, and a few visits to the Container Store to reorganize a 750 square foot living space. We were comfortable in the Happiness Hotel sort of life, as long as we were in it together.

“No one understands what we are doing….so we’re just going to be untraditional,” he whispered in my ear, which was the most romantic thing ever.

In that moment, I gained the confidence I needed to turn from inward to outward. I also found out we were having a little girl.

For me, writing is more than self- expression. It’s a way to connect to the world. By opening up, I release my own neuroses and am ready to be receptive to the problems of others, reminding me that I am not alone. Instead of dwelling on my own problems, I open my heart to receive. I become a better problem solver, a more creative businesswoman, and a more compassionate human being.

Life is not a series of picket fences. It’s a tornado of unpredictable moments, human flaws, business challenges, and hardships of the heart. It’s not about what happens so much as how we uplift each other to bravely stomp through them…together.

So I’ve decided to start writing again. About everything. But especially about openness. After all, I would like my daughter to be born out of strength, and secure in a different, yet very loving family model. I would like her to know that sometimes the best things in life are not planned, but happen serendipitously. I would also like her to realize we are united by our flawed humanness, not by cropped Instagram pics.

This little person growing inside is already teaching her father and me a lot about love, strength, and what’s truly important in life. We may not have a standard Facebook-approved life, but we’re ok with that. Like many, our path won’t be easy and we’ll will have to do a bit of bushwacking to find our destination. But it’s the journey that matters more anyway.

My demons have finally quieted. In my new vision, my life won’t be a ‘chaotic mess of scraps’, but a beautiful patchwork quilt stitched with creativity and compassion. And that’s worth writing about.